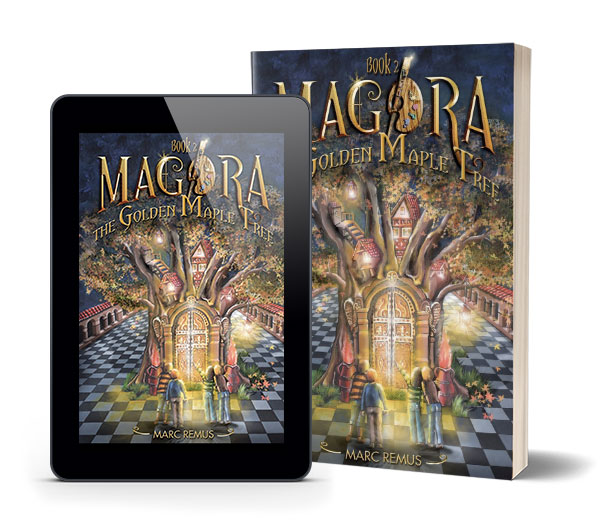 At the end of a boring summer in her un-magical hometown, Holly O’Flanigan is eager to return to the parallel world of Magora.

Holly’s nosy neighbor, Ms. Hubbleworth, has been missing for a year, and Holly and her friends, Brian, Rufus, and Amanda, know where she is. A year ago, they left the real world together and entered Magora via a painting Holly’s late grandfather created.

When Holly and her friends head back to Magora to enroll for their second year at Cliffony Academy of the Arts, Holly finds out that her friend Ileana is severely ill. She suffers from a disease that dissolves her blood and turns her back into what she was before—a so-called Unfinished, an incomplete, painted creature that drains the blood of others to become whole.

Holly tries to find a cure, but in vain—Ileana’s illness is progressing. While Holly continues to donate blood to keep Ileana stable and the new school year starts, she meets Ms. Hubbleworth again. Surprisingly, her nosy neighbor has no knowledge of her old life back in the real world and seems fully immersed in her position as a teacher at the art academy.

When Holly learns that the leaves of a mysterious Golden Maple Tree could cure Ileana’s illness, she begins her search for the tree and discovers an ancient monastery where the dangerous blood-sucking Unfinished live.

But Holly’s best friend Rufus is kidnapped and taken to the monastery. With her other friends in tow, Holly enters into a fierce battle against the Unfinished to free Rufus and collect the leaves of the Golden Maple Tree to cure Ileana. In the process, Holly learns the truth behind Ms. Hubbleworth’s memory loss—changing everything Holly thought she knew about Magora.