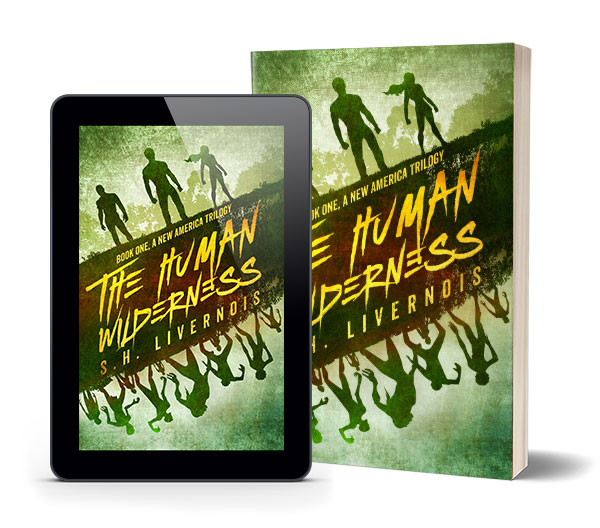 The Human Wilderness by S.H. Livernois

Would you face monsters for the ones you love? There are no people left on Earth, except Eli Stentz and seventy-five others. They hide within the steel walls of a settlement called Hope, tormented by a horde of soulless, mutated humans who howl at their doorstep day and night.

The survivors call them zombies, but the name doesn’t quite fit. The world belongs to them now—the Parasites. One day, a stranger emerges from this void with tales of survival and horror. Eli can’t believe his eyes — this man shouldn’t be alive. Six years ago, humanity succumbed to a mysterious epidemic and civilization collapsed. Society never recovered, leaving the post-apocalyptic landscape a barren, dangerous wilderness. So why would this stranger kidnap one of Hope’s children? And why Lily, a girl Eli loves like a daughter?

Plagued by these questions, he has no choice but to face the monsters outside Hope’s walls to rescue her and bring her home. But he doesn’t expect the mystery lurking in the wilderness. For the world isn’t empty after all — there are more settlements. Most have abandoned American democracy, embracing a more dystopian way of life. And they are connected by a disturbing conspiracy. But Eli has other monsters to fight. For outside Hope’s walls are the memories of his violent past. After all, no one lives through the apocalypse without getting blood on their hands. Eli knows that better than anyone.