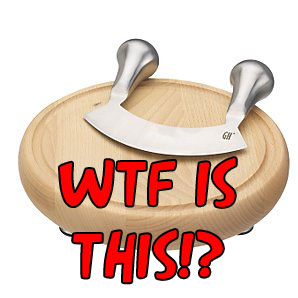 A few months back, I was watching an episode of Curious George with the kids. If you’re wondering why, it’s because even mothers get bored sometimes and whatever the little twerps are watching is sometimes interesting, particularly since George is good friends with the lovable Italian Chef Pisghetti. 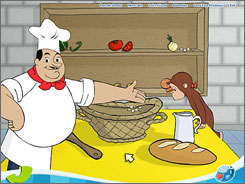 In the Season 4 episode, Cooking with Monkey, George and Professor Wiseman set out to do some cooking, only to find themselves producing some truly disgusting results. They end up in the Chef’s kitchen, where he tells them they can use it to do whatever they like. They began to explore the tools and on the table was this wooden board with some two-handled blade. (picture is not from the episode)

I had as much of an idea of what it was as they did and I found myself mesmerized when Chef Pisghetti came in, rocked the blade back and forth over a little cluster of olives and suddenly had minced olives. OH. MY. GOD.

After the episode was over (since I… wanted to know how it ended…) I went to my computer and immediately began Googling all these stupid phrases that I thought might lead me to the name of this miraculous tool that the Chef did not name.

Eventually, “double handle mincing knife” did the trick and I found out that it’s called a mezzaluna.

I found out that “mezzaluna” is Italian for “half moon” and that it’s particularly handy for chopping fresh herbs. Since I’ve got a wild herb garden in my yard, I thought this was the perfect addition to my kitchen. I put it on my wish list and Mr. Pikko so graciously purchased this one

for me for Christmas. Thanks Chef Pisghetti!

Purchase a mezzaluna on Amazon: