When it comes to organization, I’m a terrible mess.

We moved into this house in October 2010 and now with 2012 just around the corner, I’ve started to realize that there are a lot of things that I just never did get around to doing. Not the big things like finishing painting the inside, which I’ve been stalling on for over a year, but the little things like the hall closet having a box of trash bags shoved in next to the sheets because I hadn’t yet figured out where I was going to put it. 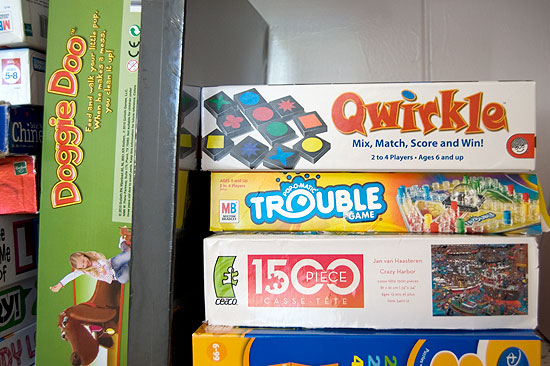 This past weekend I managed to totally re-organize the hall closet, making room for the slew of new board games that the kids got (including, yes, a game called Doggie Doo

), putting sheets up high where they couldn’t reach so that they’d stop taking clean pillow cases and using them as doll blankets or super hero capes, and clearing out my paint cans to put them in my closet. I also cleaned up Buddy’s closet, which we use as storage since he doesn’t hang clothes up and I found out that I have a whole lot of Kleenex stored up in case of a runny nose emergency.

In the end, I wound up with two full extra shelves of space that I can start moving batteries and light bulbs to, which is where they should have been all along!

Next, I’ll need to tackle the kitchen and get it organized so that I don’t have things all over the counter. Sigh.