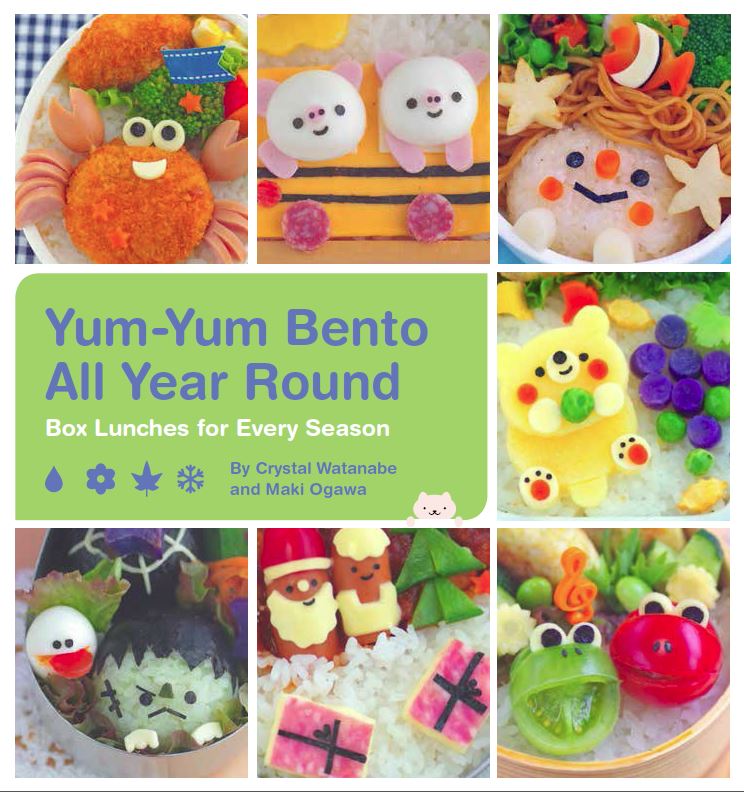 While it’s easy to say that 2016 was a terrible year, I can’t judge the entire year on October and November. A lot of great things happened to me in the last year. I made new friends, I broadened my horizons, I happily worked my butt off, and I had a really wonderful Christmas. Here’s a look back at all the good fortune that 2016 blessed me with.

Yum-Yum Bento All Year Round

My first cookbook, Yum-Yum Bento Box, was first published in 2010. Not much time went by before I was itching to do a sequel, and my amazing co-author, Maki Ogawa, felt the same way. But being first-time authors and not knowing much about how things work, after being gently told it wasn’t the right time yet, we kind of forgot about it. We signed with an agency, but that went nowhere, and so in 2015 we broke things off and tried again on our own.

As a result, Maki and I began writing the sequel, Yum-Yum Bento All Year Round in December 2015 and finished sometime in February 2016. It was stressful doing it on top of my regular work, but Maki and I worked together and got it done in time for our deadline. The book was just released a few days ago, and in 2017 I’m looking forward to helping promote the book locally here in Hawaii and online.

In April, I dipped my hat into a new area of the publishing industry and cofounded a professional organization for indie freelancers with Nikki Busch and Anne Victory. Our first year has been a real learning experience, but I don’t regret doing it at all. Best of all, I’ve gained two very good friends and met a ton of amazing freelancing professionals. I have high hopes for the AIPP in 2017 and beyond.

In June, one of my nieces was graduating college, so the whole family planned a trip up to San Jose. Meanwhile, I made sure we left early and accidentally found ourselves in Los Angeles, where I burned through tons of points to get us to Universal Studios, where we finally got to visit a Wizarding World. Sure, it didn’t have Diagon Alley yet, but the castle was amazing, the butterbeer was killer, and being able to say I own a wand that I bought at Ollivander’s is way better than getting one in the mail from The Noble Collection.

I also bought a robe and have dragged embarrassed children to the movies and mall dressed up as a really old Gryffindor student. Seriously, I must have flunked my O.W.L.s twenty times by now. 😀

I do regret going before hot butterbeer was invented, though. Damn you, Universal!!

This year, despite the fact that I edited less words than last year (I blame a bunch of events that I had to take time off to plan for), I more than doubled my client list. I successfully ran my NetGally co-op for the entire year (though that was exhausting), launched a new service, and also launched my Client Dashboard.

Some stats for the year:

Mr. Destruction will hopefully be starting preschool in February, so I intend to make use of all that uninterrupted time by napping twice as much.

Hahaha, kidding. I’m hoping that I can increase my editing word count by 50% (I’ll sure need that extra income with the cost of preschool, sheesh!) and free up a lot more of my time at night. Right now, I don’t consider myself working full-time. I do a lot of admin work and networking during the day because those tasks can be interrupted. The bulk of my editing work is done in the late afternoon, during naptime, and at night after he goes to sleep. As a result, I rarely have time to myself. Ideally I’ll have an uninterrupted day and will be able to block off a specific hour for admin and then focus on editing.

I spend way too much time right now just deleting emails I don’t even read, so I’ll be doing a lot more work at the start of the year to reduce the amount of unnecessary email I get from various lists, affiliate companies, and other nonsense.

I’ve got three new services I’d like to launch this year, and it’s going to take a lot of extra effort on my part to do this one, but these three services will help keep me on my toes and growing. I’d also like to get Book Bang built up more this year and improve current services.

The biggest hurdle, and one that will also be dependent on my newly structured days, will be the building of my YouTube content. I launched that last fall, but ended up so swamped that I couldn’t get even my first planned video out the door.

And finally, I have to learn to give myself weekends off and let myself blob on the couch a bit more often. I think I can count the amount of weekends I took in 2016 on one hand. I usually found myself to be a lot more productive afterward, so I think allowing myself to relax now and then is more useful than cracking the whip constantly and wearing myself out.