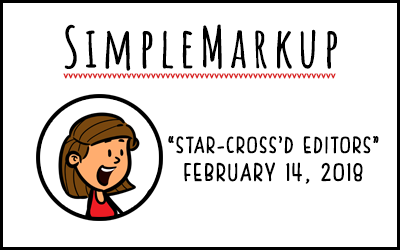 Happy Valentine’s Day! Big thanks to my illustrator, Galihwinduadi, for doing this one for me in a hurry.

This week’s comic is dedicated to my all-time favorite couple, Romeo and Juliet. And yes, I’m making fun of them, but it’s a coping method, okay? I had to bust out my dusty copy of The Complete Works of William Shakespeare last night to make sure I got the lines right, and I noticed that I’d highlighted all of the lines that they used in the 1996 Baz Luhrmann adaptation Romeo + Juliet, so of course I had to go and watch the death scene. 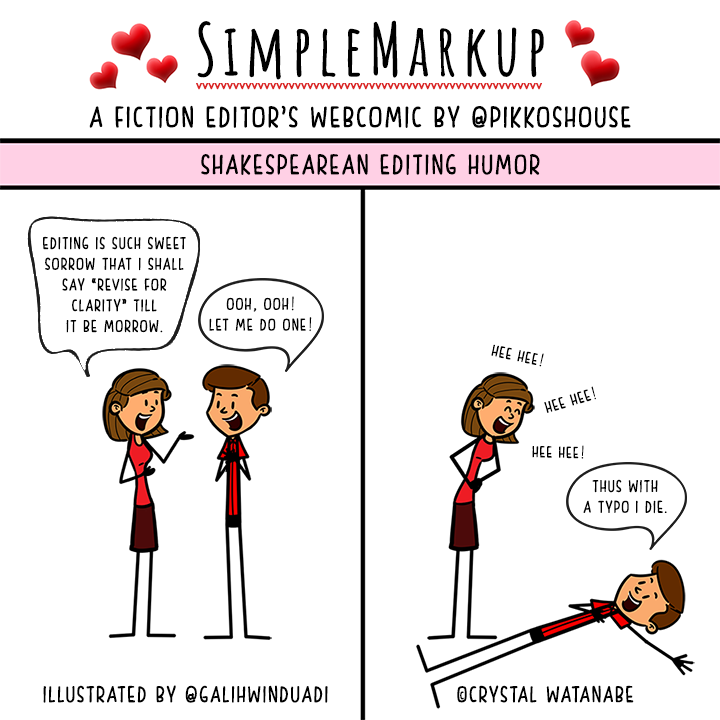 Romeo + Juliet holds a special place in my heart (Along with Moulin Rouge. Thanks, Baz.) because in 1996 I was only seventeen, not much older than Juliet in the film. I had a girl crush on Claire Danes leftover from My So-Called Life, Leonardo DiCaprio was literally in every single teen magazine I could get my hands on, and the whole modern spin on it just looked so interesting, so of course I had to go.

If you haven’t seen it, DO IT. It’s a pretty amazing adaptation.

Did you catch the little bonus in there? Yes. Ant-man is in Romeo + Juliet. LOL!

Seriously though, it’s glorious madness, the acting is great, the soundtrack is killer (I still listen to it over twenty years later), and the modernization of it works shockingly well. However, I should note that I have some Romeo and Juliet movie bias because my top five movies of all time includes this movie and Shakespeare in Love, which is also a Romeo and Juliet adaptation.

I made my high school boyfriend take me, and I give him a lot of credit for sitting through a movie in iambic pentameter, but he probably had no idea what he was in for at the end. With me, that is.

I’d of course already read it, since Romeo and Juliet was what we studied in freshman English, so I knew how it ended. But what I didn’t know, and what I’d never in my mind ever thought possible, was that he changed the ending. Baz Luhrmann made it MORE tragic. I didn’t think you could make Romeo and Juliet SADDER, but he totally did.

When I realized what he’d done, I started freaking. It was too much. I ugly sobbed my way through the death scene and then I didn’t stop sobbing until about twenty minutes later. No joke. I literally cried all the way home.

And then I started my first website, Romeo + Juliet’s Scrapbook Helper on Geocities. It had background midis and link circles and construction gifs. I even have a hard copy scrapbook somewhere, hidden away. I was obsessed. I don’t regret a second of it.

Anyway, if you’re still with me, have a great day, eat lots of chocolate, and if you have Starz, go have a cry with Claire Danes and Leo in fair Verona.