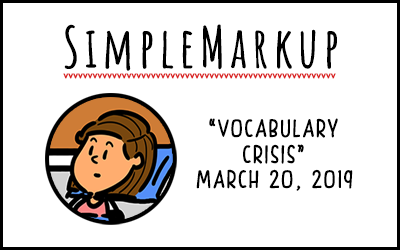 I got in a new batch of artwork in the last week, so I’m super excited about the weeks to come.

Something that has amused me for some time is how people think I actually illustrate SimpleMarkup. It’s definitely not! My illustrator’s name is Galih Winduadi, and he’s from Indonesia. I first found him on Fiverr, and he was one of several “stick figure artists” I’d been trying out when I was developing SimpleMarkup. Galih’s work was by far the best, and what I’ll do is every now and then I’ll send him a writeup of images I need, he’ll send them over, and then I use those images to create the comics.

A lot of times I’ll swap out faces, change clothing colors, and sometimes I’ll add in outside artwork, so rest assured I do some work with the graphical aspect. The writing is all me, but my Pikko’s House Slack office is often a great source of inspiration for ideas.

This week’s comic is a bit of an exaggeration, because while I’ve had this whole “I just learned a new word that apparently the whole world knew except for me” thing happen to me before, but it didn’t keep me from sleeping, just Edie. I bust my butt so hard that I can’t afford to actually lose sleep over a word. 🙂

The other day, I learned the word catawampus, but I didn’t feel too bad about that one because it’s apparently quite regional. Sometimes I have to excuse myself for living in the middle of the ocean for forty years.