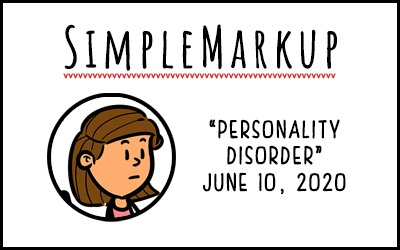 Woo, SimpleMarkup is back!

If you’re thinking, “Back? What do you mean?” Well, I mean that last week I didn’t write a comic. It might even be the first time I’ve ever missed doing a comic in the nearly three years since I started this comic. Last week was bleak, and the appalling current events basically sucked any ability out of me to be funny or creative.

This week’s comic addresses a very common issue I see in my work: head-hopping. Some authors know very well what they’re doing and insist it’s okay. Others only do it here and there and can easily fix it. Still others confuse it with omniscient, which is totally understandable, because it’s just really confusing.

And while some people respond by saying that Nora Roberts and Stephen King do it, therefore making it okay, there are a couple of things us editors tend to say to that.

First: Are you doing it well? Two: Are you selling like Nora Roberts or Stephen King? If your answers are “I don’t know” and “no,” then it’s probably best to study writing perspectives before simply trying to emulate it on the fly.

And you know what? Your editor will probably thank you for it! Seriously, editors really appreciate it when authors make an effort to learn the craft of writing. Expecting us to Band-Aid the problem for them, not so much.