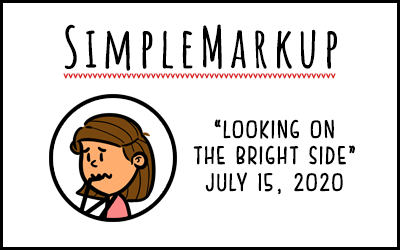 Whoa there! It’s the middle of July, and we haven’t all gone up in a ball of light, abducted by aliens? I’m shocked. And delighted.

Or maybe we were, and we’ve just had our memories wiped. In any case, if we’re in the Matrix, this sure is a crappy server.

This week’s comic deals with a rather unfortunate occurrence: when something crosses our desk that seems unsalvageable. As an editor, it’s hard to feel like you’re discouraging someone from being a writer, but at the same time, we have a strong respect for the craft of writing, which means a strong disregard for honing that craft can be frustrating to see.

Something that is not always apparent: some authors and works aren’t yet ready for an editor. Self-editing is a task that some people—usually novices—think they don’t need to do at all, not realizing that this is placing entirely too much of the writer’s job on the shoulders of an editor.

It took me a while before I realized this, and I started declining projects. I used to think that I could help anyone, but now I’ve come to realize that that’s just not my job, and trying to make it part of my job leads down roads I’m no longer willing to walk.

Oh! Before I forget: Don’t forget to buy a custom Edie Grammar masks! I have two styles available on my RedBubble store: