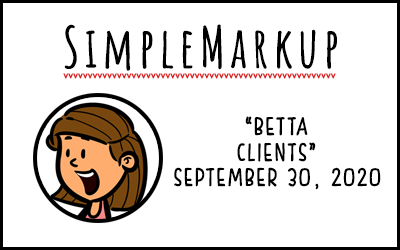 Wow. Yesterday was a total stress-fest for me and most of the people who live in the US, so today I’m hoping to dive into work as a substitute for sticking my head in the ground. And I’m taking some Brownie M&Ms with me.

That said, work has been a frustrating experience in the beta area, for both me and my team members. Beta business is booming, but with more projects comes more “betta” clients. As in, the fighting fish.

I was a bit on the fence about posting this one, since it’s on the meaner side, but then I thought back to the somewhat disturbing client experiences I’ve had this year when feedback wasn’t to the author’s liking, and I decided that no, this type of behavior deserves to be called out.

In the last several months, I’ve had four rather unpleasant beta clients, all of them through Fiverr Pro, where after the report went back, the author then proceeded to get aggressive against the readers on my team.

“What is her educational background?”

“Where did she grow up?”

The way I match readers to projects is by what they like to read recreationally, meaning they’d be a likely reader of that book in the wild. But when the report isn’t glowing, some authors react by blaming the reader for not “getting” the book. Being “not fit” to read the book. Not having the right college degree to read the book (excuse me?!). Being a—ugh—woman.

I’ve even had a (now-ex) client browse my team page, choose who he assumed was his beta reader, and publish her name with some snide remarks about her character. The kicker? He chose the wrong reader, which meant he’d officially printed libel in his book by naming someone who never read it. Obviously, this type of behavior is unacceptable.

My advice to any beta reader who encounters this?

Okay, maybe a polite “good luck” and a calm walking away, but you get the idea.

And if you’re one of those authors who hires a beta reader but don’t actually want honest feedback?

I’m not your mother.