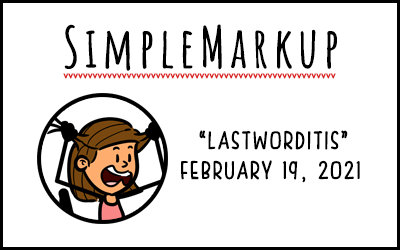 I had meant to be on it this week and post this on Wednesday like I’m supposed to, but this week has been rather crushing when it comes to deadlines, and I’ve barely had time to do anything but work and stress out—not a healthy combination.

Add to that, I find myself easily going from 0 to 50 on the crankiness scale, and it feels like lately Facebook’s algorithms are just picking whatever will tick me off the most and boosts those in my feed. I get the sense this is happening for others as well, as everyone seems to be on edge.

On that note, here’s an alternate, inside-joke version of the comic regarding a seemingly innocent post in a (public) editors group that seemed to jab people’s sanity with a hot poker.

Anyway, if you’ve never heard the term, lastworditis is just what it sounds like—when you always feel compelled to go back and get the last word in. The struggle is very real.

The argument was over whether the word “seaside” is used in America, and it felt like it ballooned to epic proportions, spread out over the course of a week.

In hindsight, it’s somewhat hilarious the way that one simple word can bring out the most passionate of word warriors. When you’re in the thick of it, however, it’s anything but hilarious, and your desk gets a hefty serving of forehead.

Have a wonderful weekend, edibuddies!