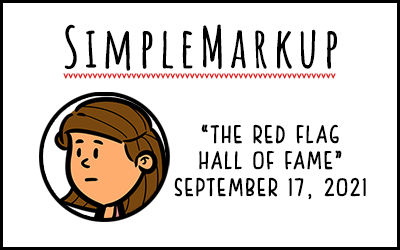 WOOHOO!!! TWO HUNDRED SimpleMarkups! Wowowow! I mean, I was supposed to do it last week, but, you know, a hurricane of deadlines rolled in, and I had to focus.

It’s crazy. I started SimpleMarkup in 2017, thinking I’d do a comic a month or maybe a comic every two weeks if something came to me. But then that turned into weekly, and somehow, I kept that going. I’ve been struggling with sticking to weekly in the last few months, but while that’s due to an insane workload, it’s also because 200 was looming large, and I was intimidated. I mean, it was a landmark accomplishment, but I also felt pressure, and pressure is one of the worst things for my comic writer brain.

The theme for this whopper is actually coming in the form of TEN comics, all to represent what I’m calling the Red Flag Hall of Fame.

Freelance editors deal with a lot, especially when we primarily deal with direct clients, because, well, because people. People come in all shapes and sizes and types, and when you throw creative genius and potential and art into the mix, that is often the start of a wonderful business relationship yet also ups the possibility of running into… interesting individuals with interesting ideas of how to work with editors.

Anyway, without further ado, here are all ten Red Flag Hall of Fame comics. The social media rollout for this will be happening in a trickle over the weekend.

Ah, yes. The good old exposure bucks pitch. Only sometimes people will say that your exposure payments are contingent upon whether you make it a smash hit.

While stream-of-consciousness novels can be very compelling, it’s become a red flag of mine, particularly if the author hints that people have read it and simply “misunderstood” it.

Editors will often ask writers what their target audience is because it really helps us to understand what kind of tone the author is aiming for. Sometimes, though, the client just says it’s everyone. This is not a thing unless you write worldwide phenomenons.

This is a very common joke among editors, and for good reason: We hear this so often!

I’ve had people ask to pay me according to their paychecks, and they usually haven’t written the entire book yet, and I, the editorial equivalent of Rumpelstiltskin, am supposed to turn the first draft into spun gold.

This one came from an edibuddy, and can I just say that even the thought of a client sitting behind me while I edit is enough to give me nightmares?

Ah, the good ole NDA request. Pro tip: Whenever someone mentions an NDA, most editors will automatically assume the manuscript doesn’t need it at all, but the author has already made space for their Academy award.

The people who want the all-in-one edit usually only want the price for regular service. Or they have a budget of $250.

Now, before you scoff at me and say “Crystal, come on. People who want to write the next great American novel read books,” let me just hold up my hand and stop you right there.

Yes, people who don’t like to read want to “write” books. Don’t ask me why or how, but I’ve seen this first hand. Others have heard it as well. I have no idea why this is a desire of people who don’t actually like books. It’s a mystery!