I’ve been meaning to write reviews about ‘V’ since about three episodes ago, when I took some notes for myself to refer back to, but when I sat down to write, I couldn’t even bring myself to waste my time roasting such a sub-par show. However, I’ve decided that I need somewhere to vent my frustrations with not only the show, but with myself for continuing to watch it. Having watched for so long, I simply have to just watch until the end of the season, when it will undoubtedly be canceled and I’ll be free from its grip forever.

Right off the bat, the episode starts by making my head explode by treating us to YET ANOTHER scene between Ryan, Anna, and his shrieking baby lizard, the formula for which has been hammered into our heads for weeks:

This scene is fucking old and tiresome. STOP IT!

This was seriously the best part about Ryan being captured because you know that as long as the Fifth Column has him, he can’t do another scene with Anna like this. You would think that after all his years living on Earth, he’d have picked up on the fact that sometimes babies cry. Amazing bit of useful human intel there. I should be a V spy!

So anyway, as I was saying, Anna uses the baby to demand more betrayal out of Ryan, this time ordering him to kill Eli Cohn, which is funny since they spent so much time before this showing how difficult it is to even find Eli Cohn. This time Ryan uses his super powerful V hunting skillz to find Eli within the next hour. He’s so awesome! Also, Father Landry is stripped of his collar and is no longer a priest.

It ends up being a trap and Eli’s group subdues Ryan with weird looking tazer guns before he calls Erica to rain on her new-found free time with her family with the news that he’s going to kill Ryan. At this point I really wanted her to just be like, “Don’t give a shit, bye!” as that’s what I felt like, but Erica had to be her same old overly noble self and ditched her family to go talk the Fifth Column out of beating the life out of him.

Turns out that Ryan getting caught was part of Anna’s plan, as she put a tracker on him to find Cohn. Her next step is to call in an anonymous tip to the FBI so that they go down there and kick shit up instead of her. Once Cohn’s crew find out they’re surrounded by FBI, Erica comes up with the idea that she should play hostage in order to keep her cover. She has Eli smack her around to make it look real. Chad Decker arrives on scene to report and Ex-father Landry runs down to look helpless and confused.

Push to get Joe Evans into hostage crisis situation!As if it wasn’t crowded enough down there with practically the entire cast down at the siege, Anna decides it’s time to axe Tyler’s parents to get him back in their camp. She orders Joe Evans to be put into the building, which they do by showing him the news, then “accidentally” leaving behind building plans showing a secret entrance into the building.

Now, I was never a fan of the stupid info-dump Erica does on Joe to bring him up to speed on the V’s unknown plans for Tyler and her tampered-with pregnancy, but it was nice that she had someone she could talk to besides her hodgepodge crew of rebel noobs. What sucks is that with Anna planning to kill both of them, you know he’s got to die and he’s got to die right here in this building. Add in a sappy, “We have so much time to make up for!” scene and he might as well just shoot himself and get it over with.

To buy some time, Eli has some Fifth Column sleepers go stand outside in the crowd with suicide bomber vests and they take some hostages into the building. Erica rages. I roll my eyes.

While all this is going on, Anna reveals that Marcus has an “asset” in Hobbes and sends newly appointed lackey Thomas to deliver news that some previously-unheard of lost love of his named Sarah (or did I just forget about it?) is alive and not-so-well with the visitors. His proof of life is a quick, “Kyle, it’s me!” on a cell phone which is so lame because with their kind of technology they can spoof any voice they like from past recordings so you would think he’d demand video or something. Thomas gives him a device to detonate the bomb vests and kill everyone.

With time running out, Eli decides it’s time for him to just give up and die and he astonishingly hands over the reins to Erica, Miss Save Every Life. Even she doesn’t get it, but he “sees something in her”. Oh, please. He points out that his second in command knows all of his contacts with the Fifth Column cells around the world and after a brief goodbye, Erica leads the hostages out with Joe.

Hobbes, who seems to have lost half his brain on the walk over, decides that Erica and everyone else being positioned right in front of the building is enough space for him to detonate and not shower her with large chunks of brick and building. Cohn sees the vests start beeping and instead of giving the other fellows in the room some warning and time to dig out, he decides to pull out the picture of his dead wife and kid instead. Cheesy. 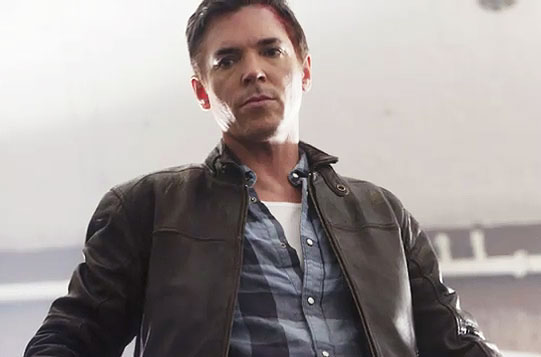 After that, some weirdly choreographed gunfight results in Joe being shot dead. Shocker. Tyler runs down and finds Erica holding him. As they grieve together in the rubble, her what’s-his-face partner from The Shield decides that she’s clean. The director agrees and they close the case, even though there still doesn’t seem to be any logical explanation for her to be talking to Landry and lying about where she’s been. And just like that, they snuff out a potentially decent background conflict. The all-knowing second in command is seen walking out of the scene, with no explanation on how he was able to do so, especially since I assumed he was in the room with Cohn.

What came next was the only truly moving scene of the episode, with Tyler packing his bags and leaving to go live with the Vs in Concordia. Erica’s emotional breakdown here managed to capture both her desperation and realization that she should have clued Tyler in from the start. This has been a real sore point for me, since while admittedly 17 year olds can be really stupid, Tyler hasn’t really shown that he’s so stupid that he can’t grasp the fate of his species being threatened. She makes a vague attempt to tell him that the Vs are bad, but never really gets to go further as Tyler verbalizes his feelings of blame against her for the death of Joe.

Erica’s underestimation of Tyler ultimately results in their estrangement and coupled with the recent loss of Joe, this supposedly pushes her over the edge. She heads over to their little cell hideout wearing an I’ve-Lost-Everything sweatpants and sweater combo and tries to pump up her meager little army made up of a news reporter, an ex-priest, and a mercenary responsible for her misery in the first place by telling them that her period of non-violence is over. She’s going to fight for realz this time! YEAHHH!

Ugh, seriously? Sure, it was a bit exciting to see her finally taking her gloves off, but it was kind of like watching a mom say that she’s going to spank now instead of scold. While I like Elizabeth Mitchell, her character is entirely too weak to suddenly take on the entire weight of the movement and therefore become the central point of the show when it had previously been distributed amongst the lot of them. Had they developed her character more as a hardass getting the job done instead of a loving weepy mother who happens to be in the FBI, I might have found this a little more believable. So while the end result of the episode showed promise, the lead-up since the pilot to it was just not the right path to take and only served to highlight the pathetically weak writing of the show.

Also, in a massively shocking scene that you could have seen almost in its entirety by watching last week’s promo, Lisa finally stumbles upon her Grandma Lizzy downstairs in the V basement. Whoever made that promo should be fired. Way to ruin something good a week in advance!

I hate it, but should you disagree: