When Survivor: Samoa began, there was no doubt in my mind that Russell Hantz was the most horrifying contestant ever to grace our reality tv eyes.

Towards the middle of the season, it started to become abundantly clear that the only reason the season was so fantastically juicy and fun to watch was because of that short little insecure man. From then on, I was a huge Russell Hantz fan.

So that being said, it was hard to watch him reach the top 3 in two consecutive Survivors. By the time the finale for Heroes vs. Villains rolled around, we could already tell by the look on his face that he flat out knew he lost. And while a third appearance of Russell is probably as seen by some as a lazy, cheap ploy by CBS and Mark Burnett to reel in more ratings, there’s no denying that with him on the cast this is going to be one wild ride.

As an added bonus, if he should get voted out in the first round by his tribe, he doesn’t have to leave the game. He can then go to Redemption Island, where he awaits the next cast member voted out so that they can duel for a chance to get back in. It’s almost as if they designed this new feature just to ensure he can make it past the initial rush to punish him for past seasons. The same can be said for Boston Rob, who is a challenge master and therefore stands a good chance at winning his way back in.

Although I haven’t been very excited about the concept of Redemption Island, especially after Sprint’s ridiculously annoying “What If” promos, the one thing that appeals to me is the fact that the contestants still in the game will have absolutely no idea just who is coming back in, as presumably they won’t be filled in on who wins the Redemption Island duels. Re-entry should be very interesting. 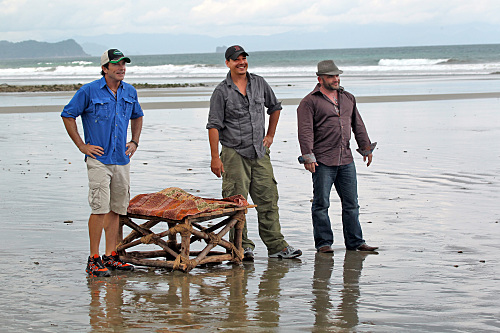 The season kicked off with Jeff and the contestants (sans Rob and Russell) flying via helicopter onto the beach. They had already been placed into tribes with orange and purple buffs and were just settling in when Jeff announced they had two more contestants coming in. The reaction from the group was appropriately hilarious, with a loud, “OH NO!!” coming from someone. Francesca paints a big fat red X on her own back by voicing her displeasure over them being in the game. Nice way to start things off there.

Boston Rob drew the first buff and ended up with Ometepe while Russell ended up with Zapatera. With their “This island ain’t big enough for the two of us.” promos, I expected this to focus on them scrambling like crazy to make it past week 1, but it turns out that casting hit the jackpot when they brought in former federal agent Phillip, who repeatedly stated that he served in three agencies. As the episode went on you had to wonder if it was because of his disturbing mental state.

In addition to his big ego, awkward socializing, bossiness, and kneejerk reactions to being interrupted, Phillip chose to walk around in nothing but a pair of red briefs. I can’t recall an affront to my eyes this bad since Richard Hatch pulled the naked card back out during his All-Stars stretch. It’s a good way to convince me to stop thinking about re-applying, because who the hell wants to see my flubby parts like that on tv? Certainly not me…

The first challenge was a physical one plus a puzzle, so I immediately assumed that Rob’s tribe would come out on top. Fortunately for Russell, he seems to have been put on the tribe with significantly more muscle and they pulled out the first victory. Not unaware of the danger he was in, Russell did a howling, jumping dance around the puzzle when they won.

Back at the Ometepe tribe, Kristina reveals just how much Russell changed this game for good when he began finding immunity idols left and right without any clues by searching relentlessly for the idol. Proving to be quite the game player, Kristina succeeds in finding the first idol, but not without first falling under the radar of Boston Rob. She lets Francesca know about it and for some horrible reason, finds herself in an alliance with Francesca and Phillip.

The only weakness I see in Kristina right now is her hardheaded drive to get rid of Boston Rob first. While it’s always hard to find the right balance between keeping your tribe strong and getting rid of cancer, I still firmly believe that Day 3 is simply too soon to be opting for strong competitors over dead weight. Francesca and Kristina discuss voting out one of Rob’s groupie girls, but tell Phillip to vote for Boston Rob. It’s unclear from editing which plan they’re going with.

Her first big mistake came when she told Phillip about her idol. When you call someone “Big Mouth Phil”, that kind of says that you should keep things to yourself, especially after he flat out tells you he’ll take what you tell him and do with it what he wants. Meanwhile, Rob has his group of six splitting their votes between Kristina and Francesca, under the assumption that Kristina may have the idol. I thought it was hilarious when one of the guys asked Rob, “You really are from Boston right? Just checking.”

Tribal Council was by far the best premiere council that I can remember. Usually the start of the season goes through a growth period before it gets interesting, but Phillip managed to change all of that by:

Dude is craaaazy! Fransesqua and Kristina change their votes to Phillip and since Rob’s posse go with their original plan, suddenly Phillip becomes the swing vote. Kristina makes a very smart play by determining that Phillip will not waste his vote on her and therefore does not burn her idol. She also doesn’t accept Rob’s proposition of giving the idol to him for survival. Mr. Pikko was quite impressed with her strategy skills.

Rob delivers when he votes, chuckling at how much he loves playing with amateurs because they “just don’t know when to keep their mouths shut”.

Watch the hilarity ensue for yourself:

I swear, I almost died when I saw this:

That right there was Survivor Gold. Forget Holly and her Italian Shoe Vendetta last season, Phillip is a much better Crazytown contestant.