With last week’s bitchin’ tribal council to live up to, my expectations were a bit higher for this week’s episode of Survivor, titled ‘You Own My Vote’. Unfortunately, Episode 2 just didn’t deliver. Sure, it was amusing to see Phillip lay down and profess his undying love to Rob, but it’s pretty stupid to hear him talk about fighting like an animal at a challenge when he’s just come from whoring himself out to someone he’s probably physically stronger than.

After a terribly boring tour with Fransesqua and Redemption Island, we get treated to Phillip hunting crabs, with the rest of Ometepe snickering nearby. I was re-watching the episode to refresh my memory when I saw a startling resemblance between hunter and prey. Unintentional or is some guy in the edit room laughing his ass off? Either way, it’s awesome! 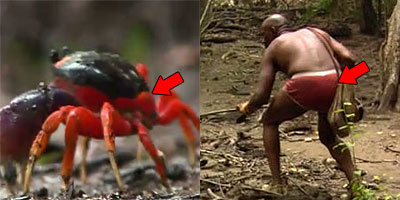 Phillip hunts one of his own!We noticed that his occupation title says, “Former Federal Agent?” with a ‘?’ in there, which is totally hilarious. One has to wonder what he was, I guessed TSA and Mr. Pikko said he must have been Border Patrol, but Phillip did insist that he was “SPECIAL AGENT SHEPHERD” so I dunno. I honestly can’t believe that a man like that could pass the psych eval for any of the big federal agencies. Unless they give psycho exams, then he’d have passed with flying colors. I wish they’d explained why he was so hoarse after hunting crabs. Was he constantly issuing crab battle cries?

So far I’m more underwhelmed than usual with the cookie cutter cute blondes that Survivor casting seems to feel are required for ratings, with Ometepe seeming to have most of the uninteresting beach bunnies like Andrea or Natalie. 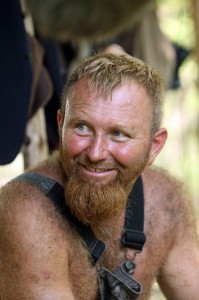 It was both appalling and annoying to see that Russell was so confident in himself that he only began looking for the idol on Day 4. Four! The King of the Idols should have been looking under Jeff’s hat as soon as he stepped off that chopper on the beach. I am seriously disappoint, Russell, especially since Man Sweater managed to find the idol by sheer dumb luck.

It bothered the hell out of me that Ralph found it by luck then makes like he’s so smart to have “found” it when he really wasn’t looking for anything but the rock he though he might have dropped in there. A part of me wonders if a producer didn’t go and play the eager parent helping their little kid find more Easter eggs bit and give him a friendly nudge-nudge-wink-wink, “GO BACK AND LOOK IN THAT FREAKING TREE YOU TOOL!” Regardless of how he found it though, he still has it. Plus, you gotta give him some Big Balls props for going over to Russell at the water hole and giving him the third degree over the clue. We’ll just have to see how he fares against the ultimate villain.

Apparently Ralph is one of the very few people who got on the show by applying, so who knows what can happen. I have a soft spot for applicant contestants, which was why I was so disappointed to find out Phillip was recruited. Sure, he makes for good tv for the time being, but recruits have a fakeness to them that I can’t really explain. It was like when I found out that the “housewife” from last season was a recruit and an aspiring actress. *puke*

At the challenge, (can’t you just hear that in Probst recap voice?) the tribes are ushered in to a challenge using Fabio’s piss pool and Phillip proves that he’s not only useless in getting people to think he’s trustworthy, but also that he can’t throw a rubber ball to save his life. Ometepe loses again and Phillip awkwardly gives a little speech to which no one replies to. You really have to feel sorry for the guy sometimes. At least he can invent words gallantrily.

As for good ole Russell, it looks like he’s got a good ally in Stephanie, as she seems to be a like-minded evil chick that can mow down fellow tribemates without batting an eye, unless it’s to bat eyes at some guy to throw them off her trail. I have no idea who his other trio girl is, as I don’t think she’s been given more than a sneeze’s worth of airtime so far. If they keep winning challenges, Russell looks to be in a good spot for making it past the first week. That is, if Zapatera doesn’t go the Hispanic tribe route and blow a challenge just so they can vote Russell out.

If there’s one thing people should realize by now, it’s that you don’t make all lovey-dovey with someone in front of Mr. Professional Powerhouse Lover. While Matt going over to congratulate Zapatera on a good job wasn’t the best idea, I don’t really see it as that big of a deal and it seemed more like an excuse for Rob to get his cronies to vote Matt out. It’s not like we haven’t seen opposing teams throw out, “Good job, guys.” before.

Too smart to make the same mistake as Kristina did last week, Rob decides to keep Phillip in the dark until the very last minute, telling him that he’ll place his right hand on the shoulder of who he wants him to vote for. An ingenious test on Rob’s part to see if he really does own Phillip’s vote. I also thought it was a great psych move on Kristina, since if it was me out there and suddenly Boston Rob touches me on the shoulder my brain would start spinning and my Marked-for-Death-o-Meter would flare up like the color of Phillip’s underpants. I looked at it as a pretty slick move to ensure he flushed her idol.

In the end, Rob’s plan to split the vote and get Matt out of the tribe went through smoothly and like that, Redemption Island racks up its first blindside. Andrea makes an appropriately blonde hand-over-mouth gesture of shock and we all get to be disappointed that although Redemption Island is in its second week, it’ll be one more until we actually get to see a duel. I suppose climaxing a show twice isn’t a very good tv formula though.

I can’t say I’m really looking forward to Fransesqua vs. Matt. Fransesqua was the more interesting of the two and even she was pretty boring. I’d need some Kristina vs Rob or Rob vs Russell or even former NFL Geico Caveman Grant vs any girl to get excited. Contrary to how Phillip feels, I couldn’t care less about him meeting his nemesis.