I have been on the lookout for blueberry bushes for months, stopping to look at the gardening section of various stores whenever we were there and not having any luck. Finally, after putting the word out on Twitter that I was DSB, Desperately Seeking Blueberries, someone replied and told me that I could probably find them at Koolau Farmers in Kalihi.

Last Thursday, I kept missing the freeway offramps to get to my intended destination of Costco and eventually realized that I was right where Koolau Farmers is located. I went in and found my dear blueberry bushes and bought three different varieties at $10.99 each. On Saturday, I spent an hour digging out a deep hole, mixed in some vermicast, and planted one of my bushes. I chose the one with lots of blueberry flowers and two small blueberries. 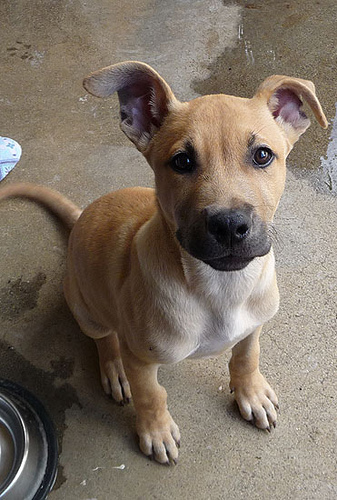 Max, the Blueberry Bushwhacker
Come Sunday afternoon, I’m walking in the yard, intending to go check on my plants in the front when I see that my blueberry bush is not only pulled out and sitting roots exposed on the lawn, but the ends were totally chewed off and all the pretty little flowers gone. The god damn dog (4 mo old puppy named Max) had come and wreaked havok on it and my sunflower plants, after having left them alone for weeks.

I was really pissed. I was even more pissed that I couldn’t scold him for it because I didn’t catch him in the act. I went inside and fumed and moped and complained and stared out the window with a blank, dead look in my face. I dragged my hubby outside to show him the damage. I went to Max’s crate where he was being isolated as punishment for nipping at someone and just glared at him. I know he knew I was mad and what I was mad about. He just looked at me with this guilty look on his face and made no complaint about being locked up, which isn’t like him.

We looked up various ways to keep a dog out of the garden and didn’t really find anything useful. Who wants to put up a fence within a fenced yard? Not us. Eventually, Mr. Pikko came to the realization that what we needed was right under our noses!

Ever since I’ve known my husband, he’s hated cats. Despises them. This isn’t because he’s a total animal hater or anything; they just enjoy taking a shit in very aggravating places, such as outside his old basement office window where he could smell their wonderful poop and pee smell all day. Eventually, after extensive Google research, he found that the solution was to buy and spread gravel around his window so that they would hate stepping there and therefore would not leave their mess where he could sniff it. That worked, but he was still mad about it.

Then when we moved into the house last October the neighborhood strays decided to move into our yard too. He was picking up piles of cat shit one, sometimes two times a day. And they weren’t even our cats! He’d spend all day double digging a garden plot and go to bed with a beautiful bed of dirt in the garden and then wake up to find cat prints all over the place. He’d scream at the sky in agony.

We tried throwing slippers at them, but this meant possibly losing your slipper or having to hop on one slipper to retrieve the thrown one. Eventually, he found out about the Contech Electronics Scarecrow

. I thought he was joking around at first, but then I watched a video and thought it was pretty genius. Basically, the Scarecrow is a motion detector water sprinkler system. You place your Scarecrow in the ground (pointing away from your direction of approach and towards your garden), attach it to a hose, turn the water on, and then turn the Scarecrow on.

Small animals that walk in front of its path will get a sudden scare by the loud hissing of a spritz of water. It’s humane, it’s effective, and it’s really freaking hilarious. The downside to using this thing as a cat deterrent is that there’s no way you can protect an entire yard with just one and at 50 bucks each, it’s not like you can buy five and place them all around your yard (unless you’re rich or something). Not only that, you then can’t walk in your own yard without getting a sudden drenching, because it’s not all that easy to remember it’s there waiting for you to walk by.

, which I will review some time soon. Plus, for a couple days I kept hearing the ear piercing shrieks of our kids and the neighbor’s kids as they accidentally walked past it before we could shut it off.

Completely hilarious, but still not a great thing, so we had to turn it off.

So obviously, the Scarecrow is best used to protect a specific plot of your garden that you don’t really intend to walk into, like precious blueberry bushes, for instance. As an added bonus, your plants get a nice little water shower. So Mr. Pikko dug up the Scarecrow and moved it to my little front garden plot. He tested it out and found that the battery was probably weak, but it was still doing the trick for now. I didn’t actually get to see the thing in action until this morning.

I was doing my watering round for the morning when I heard the unmistakable PSFTFTFTFTFTFTFTFT noise of the Scarecrow. I ran to the side and looked towards the front and saw Max there, shaking water off himself as he walked away. I cackled with pleasure.

Later, I was inside the house looking out at my blueberry bush and sunflowers when I saw Max walking toward the area. He stopped, thought about it, and walked away. Mission accomplished!!

The Scarecrow comes as a plain black item. I’m guessing the yellow bird features come separately as stickers and Mr. Pikko simply found them too lame to attach on. It’s good of Contech to think that not everyone may want that creepy parrot face on their garden guardian.

The height of the spray is adjustable, which is a good thing because during our initial tests, the water was spraying so hard and fast that it went right over our fence, over our neighbor’s hedge, and right onto a parked car on the street. It would have been terrible if we’d accidentally drenched a passing pedestrian while Max or a bird set it off. The Scarecrow can supposedly protect up to 1,000 square feet, so should I choose to extend that front garden by a lot, we’ll just have to adjust the placement to make it spray in a wider area.

For now though, I’m extremely pleased with how it’s tackling its new task and would definitely buy another if I needed to protect my back garden.