This week has been a hectic one, since Baby Girl turned 7 this week. We had her party yesterday, but I sent her to school with cupcake cones from Bakerella’s cookbook Cake Pops

. I went to both Walmart and Ben Franklin and neither of them had pink, so I had to just buy white. I had to make 18 cones.

If you’ve made these before, you probably know something I know and that is that styrofoam blocks are expensive. And they’re even worse when your pops tip over, making the holes useless for another use. Since I didn’t want to buy styrofoam, I used upside down recycled meat trays instead. Worked out perfectly!!

I simply took a knife and cut crisscrossing lines and then used a cone to punch through.

Sugar cones are too big for these treats, so you have to cut the cones shorter to use less cake. I used a serrated steak knife to slowly saw the cones down, then snapped off the jagged parts. I broke a lot and ended up with exactly 18 cones to use.

Next, I measured each cake ball to make sure it fit with the cone. My cake balls and cones were of varying sizes, so I had to do this for each one and adjust as needed. I’d made the cake balls the night before, which helped a LOT.

Next, I dropped the ball into the melted white melts and used a spoon to coat it and take it out. I scooped it onto the cone and put sprinkles, then let it dry. After they were dry, I put chocolate on top and topped it with a red M&M. 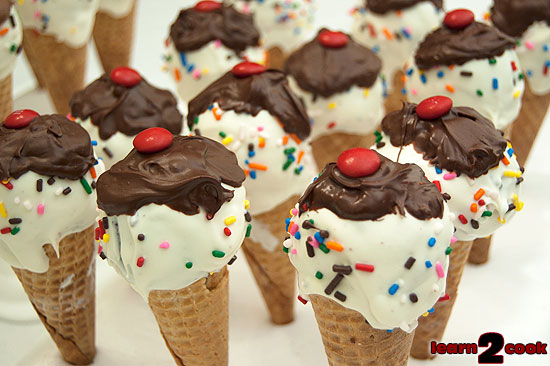 They didn’t look perfect, as my chocolate on top never did melt as good as the white melts did and so I just had to goop it on as best I could. Still, they were very pretty. I waited until they dried, then put them in plastic baggies and tied them with ribbon. We took them to school in a little basket from Easter and they were a hit with the kids, though Baby Girl said that the cone was a little stale, which I’d warned her might happen.

All in all, much less painful than my last pop experience.