The first time I heard of the Obol was from one of my online co-workers, who gave the link in IRC and we all giggled over the absurdity and ingenuity of it. It was pricey, but it looked amazing. I wanted to buy the three pack, but I asked them if I could do a review of it before I went ahead and splurged on 50 bucks worth of cereal bowls and got a head slapping from the hubby.

A woman from Obol gave me a call and chatted with me a bit about my blogs. She was awesome and cheerful and I got my bowl just a few days later.

My first impression that for some reason did not register while looking at the pictures from their site is that the bowl is MEGA HUGE. Seriously, if you look at the photo, you can see that the lady’s hand doesn’t even span the whole bowl. The “milk” area of the bowl is very deep, with a tilted upper section for you to put your cereal in. Thankfully, standard size spoons do not drop in and disappear unless you’re using a kid spoon.

The slanting of the bowl surprised me, along with the space under the upper section. This makes the bowl tall as well as wide. The oddball underside is designed so that you can hold the cereal bowl while eating, presumably so that you can sit on your couch and watch tv with a firm grip on your bowl while you eat. It’s a very handy way to just sit somewhere and eat without a table.

That being said, the size actually bothers me. It feels like you’re eating cereal out of a serving bowl and with the bottom section being so deep, it’s very hard to gauge how much milk to pour. However, this is something that I’m sure just takes getting used to. After using this bowl repeatedly, you’d of course be able to eyeball your milk level to your satisfaction.

The odd shape did concern me in the area of storage. Does this thing stack? It already takes up a lot of space in the cabinet and hogs quite a few bowl slots in the dishwasher and so the thought of having to take up a ridiculous amount of cabinet space if I buy more has made me reconsider purchasing more. I inquired with Obol and they tell me the bowl has a 50% nesting capacity but I’m having a hard time picturing how the bottom would fit into the lower section nicely without being able to do it myself.

Price wise, this thing is pretty freaking expensive for a single bowl at $19.99 plus $9.95 shipping. The price has gone up too, since a previous review I read from their site says the bowl was $15. One consolation is the fact that this product is designed and manufactured in the United States, so there’s much less worry about seeing your bowl on the news with traces of lead, arsenic, or cadmium like certain awful products from China.

Another upside is that with a $20 price, this makes a really, really great “small” gift for a co-worker or boss’ birthday or a Christmas grab-bag gift. It fulfills a pretty standard price limit for gifts and is also a useful, unique, and impressive item. 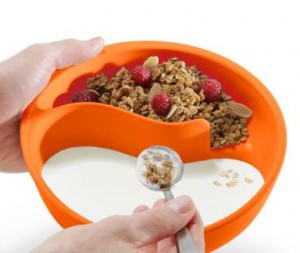 One way to avoid the shipping charges is to go and buy it at a store. Brookstone carries the Obol in stores and they recently released new colors of the bowl: Lime and Tangerine!

I realize it’s just a photo, but having seen an Obol in person, the amount of milk in the Tangerine photo bothers me. That’s probably something close to 2 cups of milk in there, which reinforces for me the fact that the bowl could stand to be smaller. I mean, I tend to eat about 1.5-2 servings of cereal in one sitting, but I can fit this in a much smaller bowl.

The one thing that I think is almost guaranteed is that if you have kids, they will go insane over this bowl. I have a 7 year old and a 5 year old and the two of them have been fighting over who gets to use the bowl each morning and I’ve had to instate a every-other-day policy for them. If I want to use the bowl, I have to eat before they wake up.

I also have to admit that I’ve used the Obol to get my son out of bed. That kid stays up late playing computer games (he’s five…) and so in the morning it’s like trying to wake up a sack of potatoes. Twice so far, I’ve whispered in his ear, “I’ll let you use the big bowl for breakfast if you get up right now.” He’s shot out of bed both times. He coined the term “The Big Bowl”.

It makes sense that this would appeal greatly to children, since it’s basically a freaking water slide for your breakfast. To a little kid, few things are cooler than that.

This brings size into the picture again. It’s way too big for kids, so I inquired with Obol and they said that they are developing a version for kids, which made me very happy and once that’s available at Brookstone, I’ll probably go down and buy that as a surprise for the kids since we have a store here in Honolulu. Who knows though, maybe the novelty won’t be as great if it’s not The Big Bowl.

For my own testing, I went with the biggest offenders I could think of: Rice Krispies and Captain Crunch. Whenever I happen to buy a box of Rice Krispies, I find myself just shoveling cereal into my mouth in a race against sogginess. This is obviously not very fun. With Captain Crunch, the cereal actually does benefit from slight soaking as everyone knows the carnage that the cereal wreaks on your poor mouth when eaten totally crunchy, but Captain Crunch is also one of the most disgusting cereals when completely soggy. It reduces down to a yellow porridge with a pukey consistency.

The best part of the Obol is that it gives you the ability to walk away from your bowl and come back later without compromising your eating experience. So if you sit down to eat and then suddenly out of nowhere your kid is yelling from the bathroom for help with wiping, you can actually get up and come back and everything’s fine. Or maybe your phone rings and someone at work keeps you on the line for 10 minutes. Your cereal is still separated and crispy.

I also tried the bowl with Chocolate Cheerios

, but found that with the swoop and scoop method of eating, my milk wasn’t as chocolately at the end, which is one of my favorite parts of eating a chocolate cereal. I can see this being a similar issue with sugary milk at the end of a bowl of Frosted Flakes, but in my opinion, crispy Frosted Flakes is well worth the sacrifice of sugary milk. I’m just not willing to make the same concession for chocolate.

The bottom line is that this bowl is fantastic for some cereals that taste best when crispy such as cornflake and sugary kids cereals, but can be a bit of a nuisance for cereals that work fine in the good old cereal bowl already sitting in your kitchen cabinets. Cereals that need some soaking, like Honey Graham Oh’s

, are a good example of one that doesn’t necessarily need this.

The pros of the bowl include:

Cons of the bowl: