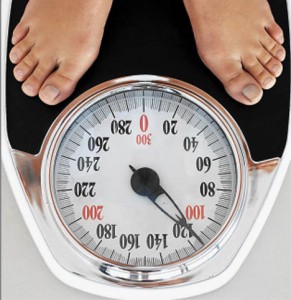 I’m fat. There’s just no getting around it already. Sure, I can brag all I want about how I lost 22 pounds in four months on Weight Watchers, but that was in 2007 and in the five years since then, I’ve gained it all back.

Although, five years? That’s awesome that it took that long, me! *pat pat on the back*

Anyway, I stepped on the scale on New Year’s Day and weighed in at a whopping 160.4.

The problem is, I hate exercising. I hate sweating, too. And I haven’t been disciplined enough to stick with Weight Watchers, so it’s time for more drastic measures. This is quite the problem when you hate panting and hate having your face feel like it’s in front of an oven. But if I’m going to count on an invite to the Hunger Games premiere, I don’t want to be fat for that. If I can lose 25 pounds in the next 2 months, then I’m going to have to sweat for sure.

The other day, in an attempt to work out at least a few times a week, I put in the Zumba

DVD my mom gave me when she ended up not using it. Baby Girl decided to be very supportive of me (which I thought was cute since she’s only 7) and exercise with me. I told her this was great because she eats too much ice cream. Even though she’s a thin girl, I don’t want her to grow up without exercise like I did, which I assume is why I struggle with exercising so much now.

The kids had “taken” and “played” with the DVDs and weights, so they were scattered all over the house. I asked Baby Girl to go find the DVD in my bedroom and she brought back the first one she found, which turned out to be this really worthless promotional DVD. If you’ve already BOUGHT the darned thing, why do you need a commercial DVD for it?

Next, she brought back the live workout DVD, so we tried that, only it became apparent very quickly that jumping in with no instruction is pretty freaking hard. We hopped and jumped around like complete idiots for 8 minutes before I told her there was no way we were going to be able to “mimic” the next dance set. I stopped it and looked for my Tae Bo

DVD, which was made in 1999 and therefore looked like total crap. I sent her to bathe for the night while I did the 8 minute workout and she came back when I was in the middle of it and looked at me in awe, saying, “I wonder what you’ll look like tomorrow?!”

In the last five days, I’ve lost close to two pounds, which is progress. I’m still not sure if I’m going to go so far as to start, ugh, running, but the DVDs are doable and I can go biking too (though I don’t really know where). The topic of running made me wonder something though: Do mainland folks bathe every day?

When I was a kid, I had a sleepover and one of my friends had recently moved from Georgia. When my mother told her it was time to take a bath, she said she took a bath yesterday. We were all really grossed out. But, is this the norm? I’ve thought about it over the years and the conclusion I’ve usually come to is that living in Hawaii, where it’s hot pretty much all the time, you kind of have to take a bath every day because you just feel disgusting from sweating all day. Then I thought back to when I was living in Mountain View on the Big Island, where it sometimes got seriously cold (I’m talking 55 degrees here people, OMG!) and as the night went on, it eventually became just too cold to bathe.

Still, living in Hawaii and being Japanese, a daily bath is pretty much a must. Sure, there are times when I fall asleep on the couch, but I usually wake up feeling really gross and sticky.

I always see in the movies or in TV shows how people go for a morning jog. Do they then shower and that’s their bath for the day or do they go home after work and bathe again before bed? I have a hard time with “sleeping dirty” and I actually refuse to touch my bed if I haven’t bathed for the night. This mentality is what makes it hard for me to make myself exercise in the morning. I don’t want to bathe twice a day, so I’d rather exercise at night so that I can bathe right after for the night, because not only is it double the water usage, but it’s the added cost of more shampoo (since I have long hair) too.

Anyway, if you have insight, please let me know! This lazy daily bather isn’t sure what people usually do.