Earlier this year, our lilikoi (pronounced lih-lee-koh-ee) vine gave us a handful of lilikois and I thought that was it because all the other flowers fell off and I thought there would be no more fruit. Months later, the vine is going crazy with fruit, so much that I have at least 60 from the last week! My mother-in-law had been asking about lilikoi butter, so Mr. Pikko asked me to make some for her. I’d never made it before or even tasted it, having mostly just drank passion orange juice or eaten the fruit by itself with sugar. The recipe looked simple enough, but it did have eggs, which made me all nervous because I always screw up cooking with eggs in a new recipe. 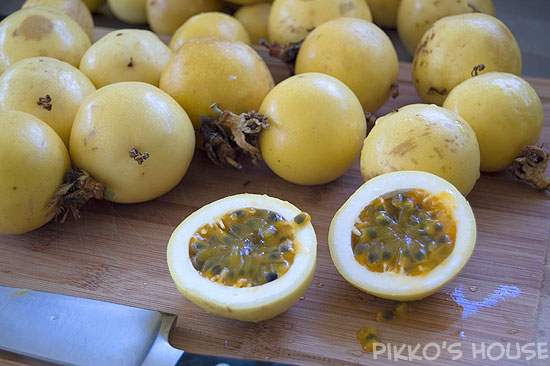 Here’s the inside of a lilikoi. You have to get juice from this and since the juice is in little sacs surrounding the seeds, it’s actually quite difficult. Mr. Pikko said he read that you can use a blender on “the lowest setting” to get the juice without grinding the seeds, but my blender doesn’t go by numbers, so I had no idea what to do there. 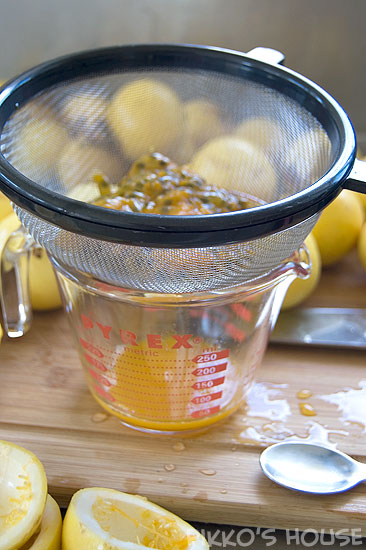 I ended up putting my strainer over my pyrex and scooping the seeds into that. After I’d cut and scooped about 4 fruits, I began mashing it with my pestle

, but this got a little frustrating, so what I ended up doing was washing one of the lilikoi halves really well and then using it to press down on the pulp. That worked really well since it was the same shape as the strainer. 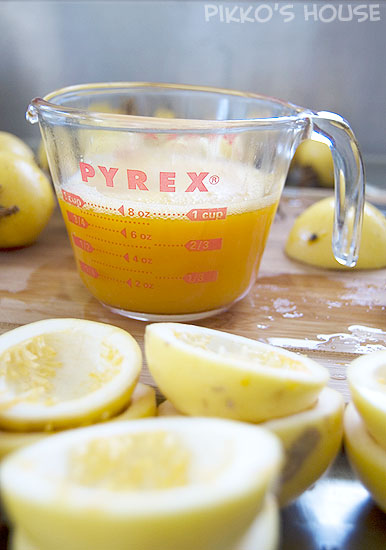 It took about a dozen lilikoi to get a cup of juice. The recipe I was following called for 1 3/4 cup juice, but when I discovered that I didn’t have enough butter, I had to half it and go with 7/8 cup juice. It’s quite a bit of work to get this much juice! 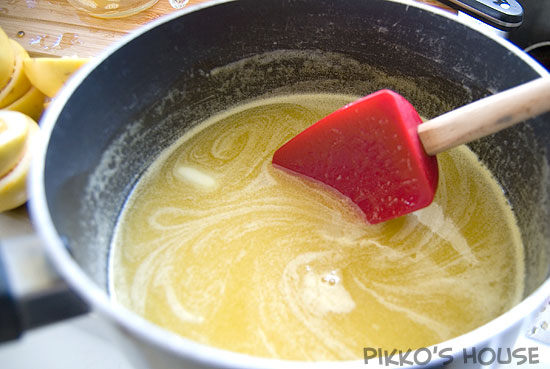 This is the melted butter, sugar, and lilikoi juice. It smells AMAZING at this stage. 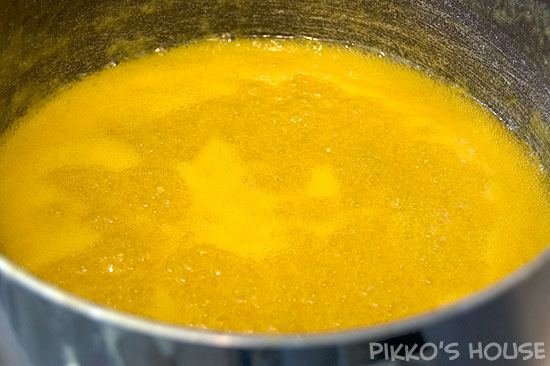 Actually, it just smells amazing from that point on.

You’re supposed to temper scrambled eggs before adding it to the mixture, which I did do, but I was getting frustrated waiting for it to heat up after adding the butter mixture to the eggs like 8 times, so I eventually just poured it in, hoping for the best. As typical with me, the egg whites cooked and I could see egg bits floating around. I had to strain all the egg out, but it looked great after that. I let it cool in containers (since I couldn’t find my mason jars) and then put it in the fridge. We tried it on toast later and it was oh so good!!! 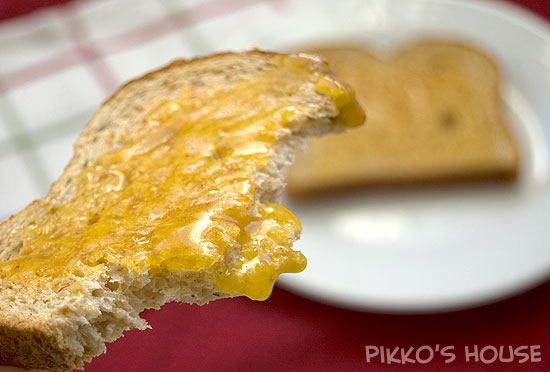 We gave a big container to Grandma J and kept the leftovers for ourselves. You can see that it kind of looks like honey. It packs an amazing lilikoi punch and is just so incredibly delicious. I find myself eating toast nearly every morning. I will try this again, but this time will try just using egg yolks instead of the whole egg. The recipe below is a half recipe from Lava Lily. Mahalo for the great instructions!