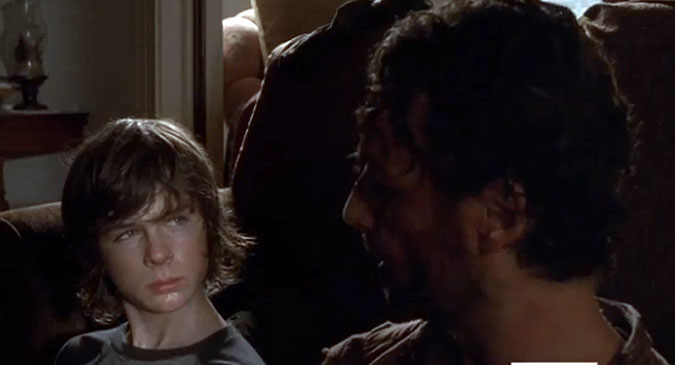 The Walking Dead returned last night and after the tumultuous and heartpounding mid-season finale last year, I’m sure everyone’s mind was racing with what was going to happen in ‘After.’

I’ve never been a diehard TWD fan. After being disappointed in Season 1, I lost interest and passed on Season 2. I endured months of Mr. Pikko screaming at the tv at how stupid the show was and how dumb the characters were, reminding him all the while that no one was making him watch it.

Eventually, in the middle of Season 3 when Lori was about to give birth, I re-adopted the series and suddenly the show seemed worth watching again (finally). And then ‘After’ happened.

What drives my interest in shows like this are the fact that they obviously intend for you to focus on the human interest side of people in the midst of a terrible situation (Fringe, LOST, Criminal Minds, X-Files, etc.) but most of these shows have some type of filler episode. X-Files would occasionally stray away from the main conspiracy storyline to do something goofy and funny like ‘Humbug’ or LOST would focus on a small problem on the island instead of the smoke monster or the Others.

AMC seems to intersperse TWD with walker-paced character building episodes that really break the flow of the show into a frustrating, plodding snoozer. Mr. Pikko fell asleep a handful of times only to rewind to watch practically nothing.

The most frustrating part is that you can tell the episode was still needed to add something to the characters at hand, but the way they did it with Smart Carl first devolving back into Stupid Carl only to bring him back to Smart-But-Still-A-Kid Carl wasn’t the best way to go. Other shows do the same thing but with much meatier, compacted content that drives the storyline forward all at the same time. This is a format I feel is required for television. Episodes like ‘After’ are simply too slow with too little character development payoff, more fitting of a graphic novel or a book, mediums that can afford occasional plodding paces for pages at a time. That’s the luxury written form has that visual does not.

When it was over, I found myself wishing I’d watched what ended up developing in 15 minutes rather than an hour. Carl’s little speech and his inability to kill what he thought was his undead dad were the payoff points, but it took entirely too long to get to that point. Michonne’s character building was better paced with good emotional character payoff, but really could have cut down on the amount of walker-walking.

I’m not asking for more zombie kills, that actually gets pretty boring after a while. What the writers and producers need to do is tighten up their content to deliver each episode with a knotted ball of tension and character. Carl can take the time to sit down and eat a 112 ounce can of pudding, but if AMC wants to keep their audience, they’ll have to leave it in the kitchen.