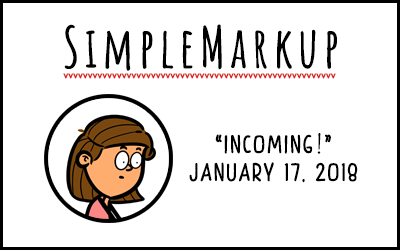 Okay, so I’m giving people advance warning here. Today’s comic might be offensive and insensitive to some, but hear me out afterward. 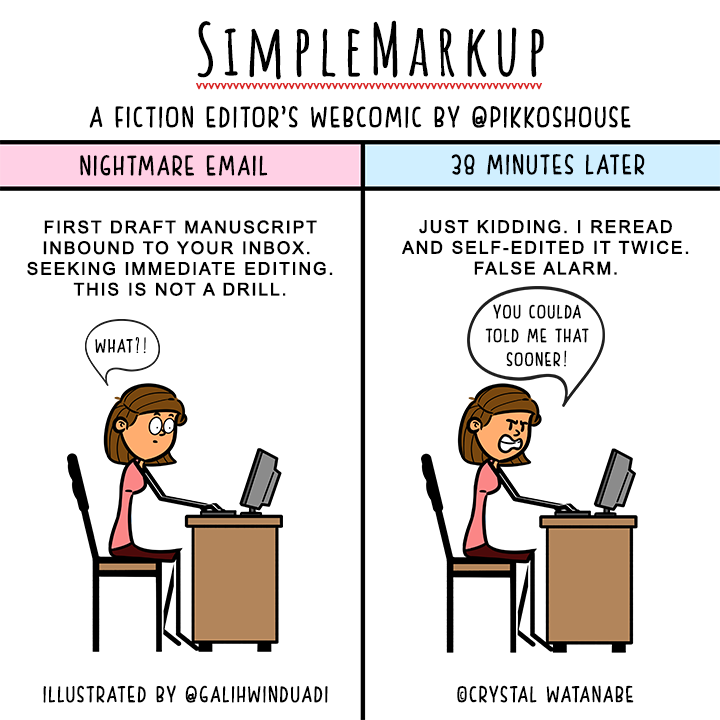 This is, obviously, a joke about first drafts and the stress it puts on editors, based on the recent missile alert snafu in Hawaii. But before you get mad at me or call the PC Police on me, know that I live in Honolulu. I lived through this little 38-minute crisis. And while it wasn’t quite as panic-ridden as the media has sometimes made it out to be, it was scary, but there was a positive side to it too.

Living out in the middle of the ocean in the middle of a bunch of military bases on an island that was once bombed in World War II in the middle of an area that gets massive hurricanes makes you a bit seasoned when it comes to disaster prep, though we do get complacent, and often when a natural disaster is about to strike, people freak out in the form of hoarding toilet paper, bottled water, and SPAM. Why? Because we have to get that stuff by ship. There’s no local toilet paper factory, and bottled water is used so quickly. And you can never have enough SPAM.

But while no one really expects another Pearl Harbor, it’s hard not to get nervous about North Korea when they’re firing missiles over Japan and having to put up with pissing-contest tweets. When they tested the nuclear sirens for the first time, I just shook my head and sighed. I couldn’t tell the difference between them and the regular sirens. “Why don’t they just use the damned flash flood cell phone alerts for something this important??” I said. “Those things get everyone’s attention in seconds.”

So yeah, on Saturday, I was making breakfast for my 3-year-old son. I walked into the living room, where my two older kids and husband had fallen asleep after playing games and phones late into the night, and I heard it, real soft. I stopped and asked my little dude if he heard that. Then it stopped. I don’t know why, but I didn’t think to check my phone. I guess I just assumed it was a flash flood alert, even though it wasn’t raining. (I get them sometimes when it’s not yet hit our area.)

Then my mom called and asked if I saw it, which I thought was weird, because who cares, right? So I checked it. My pulse started racing, and I told my mom I saw it. I ran into the living room, yelling, “HOLY S**T, THERE’S A MISSILE INCOMING. WAKE UP, WAKE UP, WAKE UP!” My mom told me to get downstairs, and we hung up. My husband immediately started closing doors, telling my older kids to close every window in the house, and asking someone to fill up the tub with water. I ran to the kitchen, grabbed a chair, and tiptoed to get our Water Bob, which had been sitting on a top shelf for something like six years. I busted it open, running to the bathroom while trying to message the first person on my Messenger list (who just so happened to be author Cheri Lasota, since we’d been chatting earlier). My husband had the radio and TV on, but there was nothing. I posted on Facebook.

While I was filling up the Water Bob, my mother-in-law called to make sure we saw it and to make sure we were all at home. She said there wasn’t much on the news. After I told her we were all together, we hung up. I had my daughter come aim the Water Bob, then rushed through the house to double check the windows, then once things were done, we convened in one room and just sat there, checking news sites, switching TV channels. STILL nothing. Then the red ticker on one channel came on, which made me feel worse, because it was once again saying that it was not a drill.

Ten minutes after the alert, all we could find were tweets, but not sure whether a simultaneous cyber attack was underway, we had to just assume it wasn’t yet clear. Because, you know, the alert hadn’t been retracted on official channels yet.

Thirteen minutes after, there was still nothing, and I told my husband, “If there’s anything coming, it’ll be any minute now.” No one was crying. My little man was dancing in front of the TV and complaining that his cereal and apple juice were in the living room “getting old” because we wouldn’t let him go get it. My kids started getting a lecture about not looking at any blasts. With nothing else to do, I just kept checking Facebook and Messenger. Even though people were saying it might be a false alarm, we still wanted to be careful.

After twenty-five minutes had passed, I felt a little better. Either it was false or something went wrong on the enemy’s side. I called my dad, whose call I’d missed during the early minutes, and he was swearing, telling me that they issued another alert on the radio saying it was a false alarm. This was probably the first real moment I felt true relief. I felt safe enough to go back to my computer. Then ten minutes later, the retraction finally came out, and I was officially pissed off.

I spent the entire day consumed with reading about it and making jokes about state workers. I made a meme after Vern Miyagi said it was his responsibility and someone under him did it. 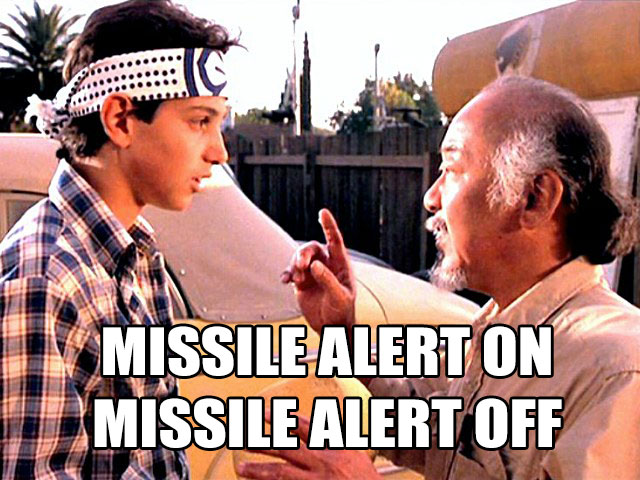 Later, I went to McDonald’s for the kids because that’s what they said they wanted, and I was kind of in a give-them-whatever-the-heck-they-want mood. While in the drive-thru, I teared up a little, simply grateful that I was alive to go get something to eat period. Stuff like a missile alert really puts life into perspective.

Anyway, back to that positive side I first mentioned. In all my disaster prepping in the past, I’d always wondered what kind of person I’d be in a real emergency. Would I collapse on the ground and sob? I didn’t think I was the suicide type, but would I give up? Would I spend my last minutes whimpering and hugging my children, regretting all the things I didn’t do?

I didn’t do any of that. I did what needed doing and then sat down and waited. I was terrified, sure, but I was also numb. Talking to my family, it was pretty much the same for them too. I talked to three parents during the alert, and afterward I realized that none of us had said last goodbyes. None of us hung up with “I love you.” And I do love all of them.

In the end, I think we all just knew where we stood with each other. We all knew already that we loved each other and that it didn’t need to be said. It’s a fascinating thing to learn in a situation like that. It’s something no drill can ever tell you. So while I’m still mad at the idiocy of the person who did it, I’m also grateful for what I learned about myself and those around me. I’m also pretty dang proud that despite people driving 100mph on the freeway, there were no accidents and deaths. It could have been so much worse.

I’m glad I’m still around to make this week’s SimpleMarkup, and while it may be a bit too soon for some, I hope it brings out a laugh in at least a few of you. If there’s any one lesson to be learned from the crisis, it’s that life is short, and we all need to laugh more.

From the land of imaginary missiles, where government employees don’t know how to spell missile,