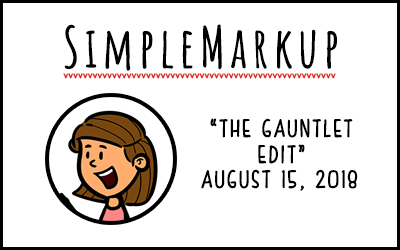 Do you ever get the feeling that something or some part of your week makes the days fly by faster? I sort of feel like that’s what’s happening to me with SimpleMarkup. I’ll come up with a comic idea (sometimes, I kid you not, the same morning I’m supposed to post it) and design and post it, and then I blink and it’s Wednesday again. If I view my year based on how quickly Wednesday arrives, it’s like no time has passed at all.

I’m back to eating ketogenic again, and it was thankfully very easy to fall right back into it. I can tell I’m in ketosis now because a week ago I started getting up earlier and earlier. I’ve also started skipping my afternoon power nap, which I used to need just to function at night a few weeks ago. It’s great for a workaholic mom taxi like me. 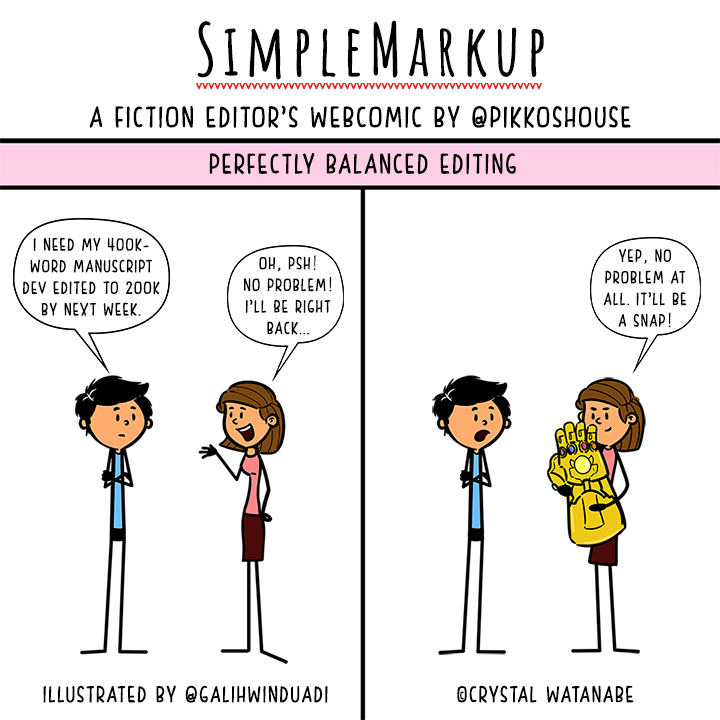 This was one of my on-the-fly ideas. The brief I’d sent to my illustrator had two scenarios I didn’t explain very well, so he asked for more detail, and this one popped into my head. It won’t make much sense to people who don’t watch Marvel movies, but Edie’s holding the Infinity Gauntlet, and now she can get rid of half of that manuscript with a simple snap of her fingers!

And now here’s the burning question that’s been bugging me ever since the fourth time we watched Infinity War after it came out on digital: How the heck does one snap their fingers with a gauntlet made out of metal?

Yeah, okay, it’s a magical glove made by Giant Tyrion, but still.

Catch up on SimpleMarkup in the archive, and don’t forget to check out the SimpleMarkup store! Or grab a Grammar Enforcer shirt via Amazon Prime.