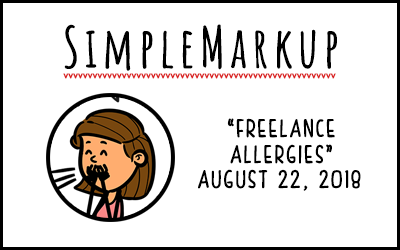 Awww, yeah! Look at that! Fifty weeks of SimpleMarkup. 🙂

Pretty soon Edie will turn one, and I have some fun things planned for that, so keep an eye out!

On the personal front, Hawaii’s got a big butthead of a hurricane coming in a couple of days. Things are already shutting down in the islands to the south, and I’m really hoping that Lane just putters out because, seriously, I don’t have time for a hurricane. That and I’m supposed to be volunteering at Amazing Hawaii Comic Con this weekend, and I wanted to meet freaking Evangeline Lilly, dang it.

This week’s comic is something that I think all creatives can identify with. 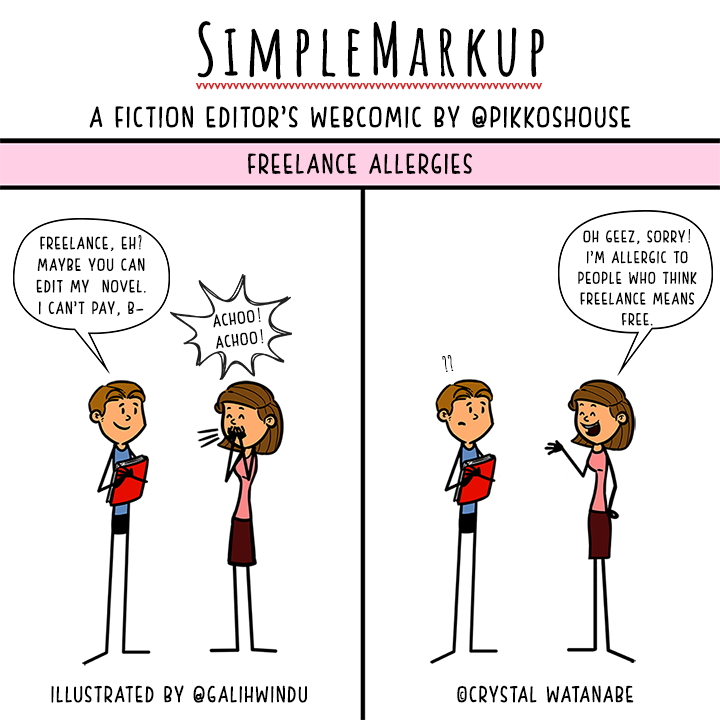 Just where did the term “freelance” come from, anyway? Well, according to Merriam-Webster, us freelancers are modern-day mercenaries. Pretty cool! And thankfully, we don’t have to spend time practicing with lances. I don’t have time for hurricanes, and I definitely don’t have time for war practice.

I thankfully haven’t had this happen to me before—maybe mostly because I’m allergic to networking in person, LOL—but I’ve seen comments like it before online, I’ve browsed Clients From Hell, but most commonly I’ve seen people declaring outright that freelance editors only deserve X amount, which, when calculated, usually comes to about $5 an hour or less. When you consider that you could make more than twice that working entry level at McDonald’s, well, it’s understandable why we’d fake sneeze and bust out the snark.

Catch up on SimpleMarkup in the archive, and don’t forget to check out the SimpleMarkup store! Or grab a Grammar Enforcer shirt via Amazon Prime.