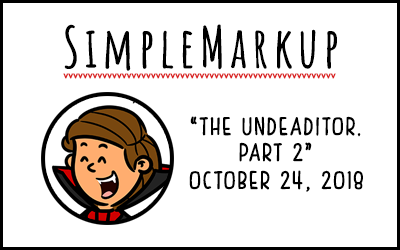 One more week until Halloween! I’ve got my party menu mostly planned out, but I still have to decorate and make my shopping list. I’m thinking of just saving some time and doing a Safeway delivery, since they keep sending me emails about a $20 coupon and free delivery. I’m still so busy, plus I’ve got the next book box coming up. I’m really starting to feel like a zombie!

Some of you may remember that last year Edie dressed up as one—she was a semighoulon! Something weird about that. I did that comic a year ago, and I specifically remember going to look up whether it was semi-colon or semicolon (before you tsk at that, it’s hard to keep track of the hyphenation or open/closeness of every word!). Since I ended up going with semi-ghoulon, I obviously must have found something supporting semi-colon.

But no. It’s crazy. It’s like Google has erased that from the internet. You can’t even search for it, not even with quotation marks. Everything takes you to results for semicolon. The semi-colon has officially been sucked into and trapped in a parallel universe. 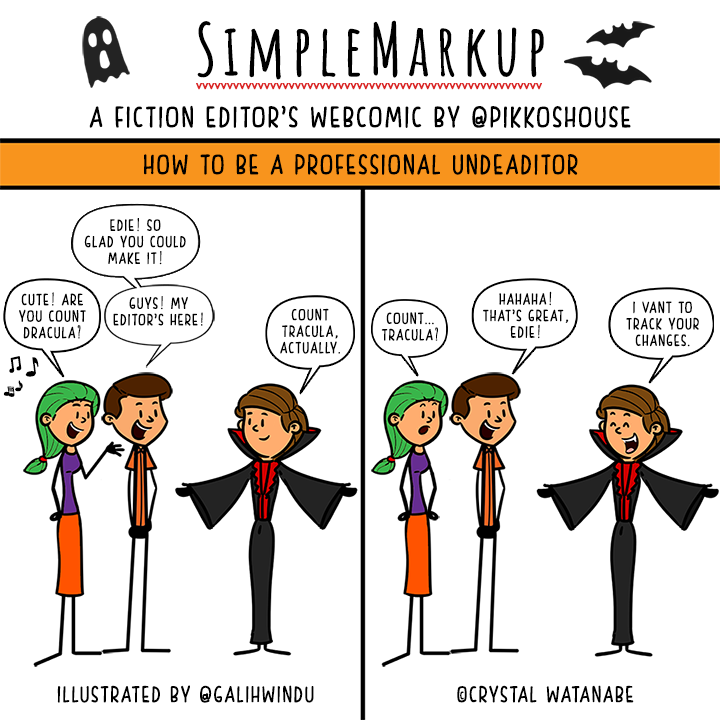 This year, Edie is undead again, and this time she’s Count Tracula. My little lesson behind this one is pretty simple: When searching for an editor (or undeaditor) for your novel, make sure you find someone who uses Word’s Track Changes feature. A couple years ago, I wrote a piece about this with author PK Tyler when we both found out that a lot of authors out there hire editors who either do not track changes or don’t even know what that feature is.

In the realm of fiction, this is horrifying! Yes, there are instances when turning tracking off is useful. The first thing I do in any line edit is to make a note on the front page outlining the changes I made with tracking off, such as converting double spaces to singles, replacing all apostrophes and quotation marks to ensure they’re not a weird combination of straight and curly ones, and removing stray spaces before and after paragraphs.

But if you wrote a book, that’s your baby. You should be allowed to know what was done, how your voice has potentially been smoothed out or changed for the worse, and how it was done. And who really has the time to manually mark and explain literally every suggested change? Who wants to put two documents side by side to figure out how they’re different? (Hint: not me, not you, and probably not anyone else)

Do you have a hard time understanding what’s going on in the manuscript with all that red? For that, I point you to this comic’s name: Simple Markup. While it’s not called this in every version of Word, it’s what it’s called in the most recent PC version, and what it means is that what is displayed is the clean, edited manuscript. If you want to view the markup, all you do is switch to All Markup mode or hit that vertical red line in the margin. It’s pretty easy!

Track Changes is the professional standard, and unless you give explicit permission or instruction to leave it off, if your editor returns your edited manuscript without the changes marked, it may be time to make squinty eyes at them and look elsewhere.

My Grammar-Nerd-A-Palooza ended, and I drew half the winners (my free account won’t let me draw more than ten). I’ll be in contact with people in the next couple of weeks about prizes, so sit tight!