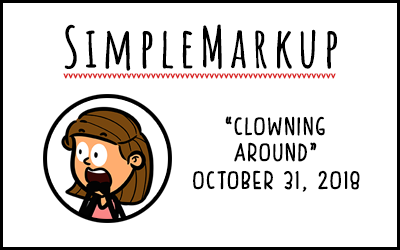 Happy Halloween, everyone! I’m so excited it’s finally here! I started making food yesterday, bought a really hideous Halloween shirt to torture my family with at our party tonight, and am having a super-cheat day from keto. Which means… CANDYYYY!

My grocery shopping delivery was a bust, by the way. It came in fine, but of course they were out of ONE ingredient I needed. Then they charged me for three small cartons of whipping cream to replace the one bigger one they didn’t have, gave me only two, and so now I’ve spent twice as much on whipping cream than I really wanted to, and still no answer from my complaint/request for a refund. 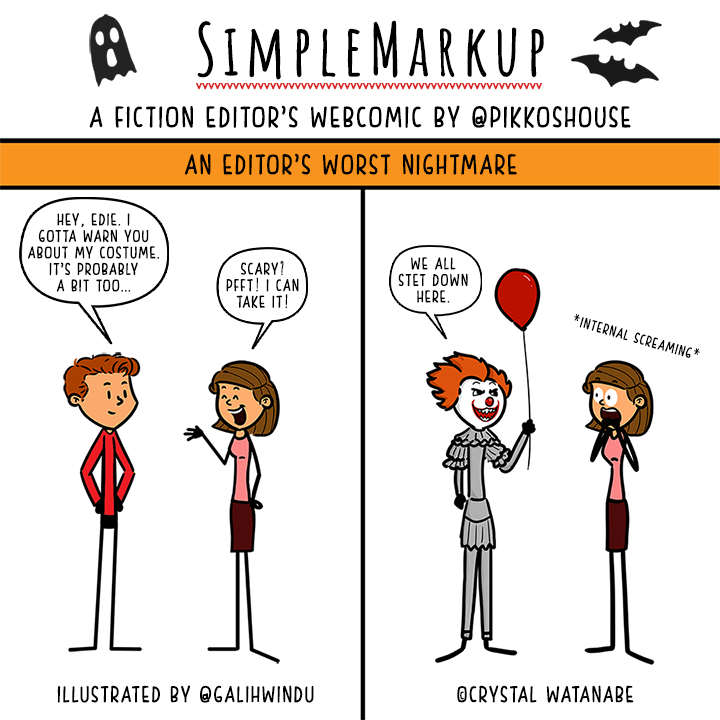 In this week’s comic, Edie gets quite a fright when her client shows up at her party dressed as Pennywise. There’s a bit of truth to this one, as while us editors generally don’t balk at our changes being rejected (seriously, we’re not always right about what you want/meant), there’s always that fear that clients will reject the important changes. The ones that we feel strongly about. The ones that matter, dang it! So yeah, this is a thing.

It: Chapter 2 wrapped up filming a couple of months ago, so I expect next year all the horror fiends will be back in theaters for more. In the meantime, here’s to hoping my edibuddies don’t encounter an overly enthusiastic Pennywise.

Have a great Halloween! Here’s my pumpkin of Count Tracula:

Happy Halloween from Pikko’s House! May you have a creeptastic evening filled with lots of treats and not so many tricks! xoxo, Count Tracula 🎃

Oh! One last thing regarding my Grammar-Nerd-Apalooza: I’ve picked my winners and will be notifying them this week. Once claimed, I’ll announce the winners. Yay!