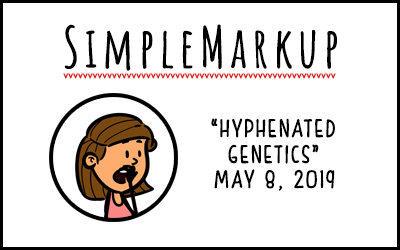 Another week, another comic, and this week’s non-work excitement came in the form of Disney announcing their movie slate for the next billion years. (okay, I’m exaggerating; it’s seven) Lots of Star Wars movies, lots of Marvel movies, and a whole lot of… Avatar movies?

I mean, that last part makes sense because it’s the best-selling movie of all time (but maybe not for long?), but even thinking back to how much I enjoyed it, I only saw it once in theaters and once on DVD. I don’t know that I would go see it more than once with today’s ticket prices. Meanwhile, I’m probably going to make time to go see Endgame a third time this week. It’s a sickness, apparently. Marvelitis.

In this week’s SimpleMarkup, Evie meets three brothers of varying heights who have very punctuationy (not an actual word) names. I thought about having their last name be Dash, but then I’d have ended up with the little boy being Dash Dash. And while that’s an actual name from The Incredibles, it felt weird to have it be that way.

Hope you’re all having a fantastic May so far. The weather has been pretty lovely out here in Hawaii. I’m so not looking forward to a scorching summer!