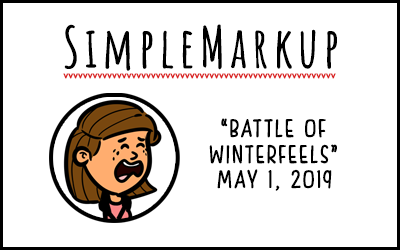 Okay, so if you’ve come here from my link on my personal Twitter and not my business social media channels (those comics are plastered with a spoiler banner), please note that this week’s comic has GAME OF THRONES SPOILERS and slight ENDGAME SPOILERS from this past weekend. You have been warned.

It was a pretty emotionally taxing weekend, with Endgame on Friday night and then “The Long Night” on Sunday night. Decades of fandom culminating within two days of each other. It was crazy. I’ve seen Avengers twice now, and I’m still haunted by it. I’ve been listening to the Endgame score quite a bit, have been watching audio and video clips of audience reactions, and in general have been fighting the urge to not go a third time. Anyway, first the Game of Thrones comic, then I’ll talk a bit more about my Avengers experience.

So this week’s comic addresses an unexpected “issue” I found myself contemplating Sunday night and Monday morning: Game of Thrones barely dropped any emotion on my lap on Sunday, despite having build up to “the only war that matters” for years. I cried about a dozen times watching Endgame, but when it came time to go drop tears on Westeros, there were none. And it wasn’t because I’d cried myself out on Friday; there simply was no real cost to the Great War, and that was a huge problem for me.

After talking this over with my husband and my Game of Thrones group and reading articles, it seems a lot of fans feel the same way. Game of Thrones pulls emotions out of us because we fear the brutal honesty and reality of George R.R. Martin’s world. No one is safe. That’s what keeps us watching, isn’t it? “What’s going to happen to X?” Martin set the bar high with the books with the Starks, and while painful, that pain has become the source of the series’ power.

But ever since the show passed the books, that world has slowly started morphing from something unyielding and harsh into the same old tropes. When the episode was over, Mr. Pikko asked me what I thought, and my mind was just blank. I had no idea what I thought, but “nothing” was pretty close. It was like a mixture of confusion and guilt, because I had a vague idea of how much work had gone into that episode, and I’d gone in expecting my mind to be blown, and I didn’t want to sound like an evil person by complaining no main characters died. Meanwhile, the Dothraki are practically extinct for some exceptionally and unnecessarily stupid reason, and much of the Unsullied as well.

I guess I just felt tricked. Sure, people died, but not many of the ones we know, and when you think about it, none of them were very surprising.
Edd’s death? Millions of people probably nailed down the microsecond he died, simply because that setup has been done so often. Theon? Come on, his photo is in the writer’s dictionary next to “redemption arc.” Jorah and Beric were very old knights, and maybe three people (I’m being generous) on the planet expected them to live. Lyanna? Fan favorite, but the foreshadowing in Episode 2 could not be ignored. Melisandre? Um, she burned a little girl alive. Like I cared about her, lol.

There are three episodes left, but it feels like the series has already ended on a sour note. Hopefully I’m proven wrong and I don’t have to then re-pin my hopes of closure on Martin.

Back to Avengers: My first Endgame viewing was a bit off, mostly because I had such grand expectations, and instead I got slapped with an hour-long wake-up call that, despite Cap saying in the trailers that they were going to do “whatever it takes,” my ideas on that were just impossible. It was a continuation of the utterly shitty feeling everyone had last year when walking out of Infinity War, and it deflated my balloon a bit.

Of course, the cast and crew more than make up for it by the end, and my second viewing on Monday was much more enjoyable. It’s an amazing film and an even more amazing accomplishment. It made me so proud to have been a fan since Iron Man, a movie I don’t even know why I saw in theaters, because I’m pretty sure I thought comic-book Iron Man was pretty lame.

So while the Battle of Winterfeels may not have delivered as expected, Endgame did, and it made for a fantastic weekend. It was pretty bad for productivity, though, and as a result this month’s Book Lovers Box will be slightly delayed.