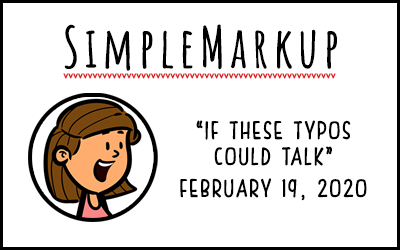 Is it really Wednesday already? I joined a local gym last week, and now that yet another chunk of my morning is taken up by my health goals, I feel like my day going by so much faster, and therefore the week flies by faster than it used to. Like, is it really the 19th already? Argh!

I thought it was about time I put that good ol’ pubic/public typo into a comic, and while I was writing this one, I realized how grateful I am that we don’t have some sort of autocorrect in our brains.

But I edit sci-fi, so of course I’ve edited lots of books set in the future where people have neuro implants that basically allow you to have a phone in your head. And that made me wonder: Will we have to put up with some clunky AI autocorrect that will make us actually SAY derpy things instead of just texting them?

I’ll probably make Verbal Typonese a series of comics, so watch for more to come!

Have an awesome rest of your week!