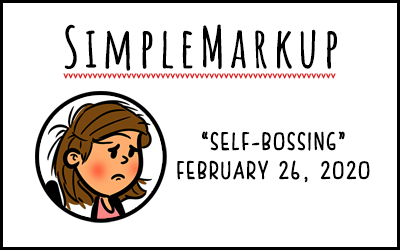 Yesterday at lunch, someone from a school of one of my kids called to remind me about lunch deposits, and everything was fine. I thanked her and made a deposit, and that was that.

Fast-forward a mere three hours, and I was croaking like a frog, with my voice cutting in and out like my throat had bad reception. I had that ominous pre-fever feeling, and I was grateful that in anticipation of catching my son’s cold, I’d snarfed down a bunch of oranges, taken Airborne and Tylenol, and would be going to sleep “early” at eleven p.m.

I woke up today sounding much better, with no fever, which is great, because I need to work, but even if I had been sick, I’d probably have worked anyway.

Last night, while making plans for waking up worse than I did, I went down my mental list of things that I could still do while sick, and that list was ridiculously long. Just more proof how important it is that freelancers take into account business overhead.

Running a business is so much flipping work, which is why it’s important to keep this in mind when setting fees. There are some days where I can only get a certain amount of hours in, and those tend to be editing hours. Then there are other days when I log in editing hours and just as many admin hours.

That said, sometimes you really just gotta chill and get better. I’m just lucky that this time I seem to have stopped progress enough where I can keep going. I’ll still probably go to sleep “early” again tonight, though. 🙂

With the COVID-19 craziness going on, make sure you stay safe, informed, and prepared!