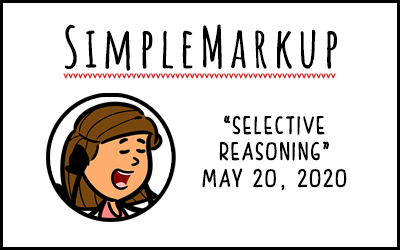 Happy super-duper-late Wednesday! I had a bumpy start to the day, staying up until almost 3 a.m. trying to finish work on a project before realizing I could barely function anymore. Then I went to bed, and of course my 5-year-old chose this morning, the first time in months and the first time since self-isolation began, to wake up at 6:15 a.m. on his own and proclaim it was time to do his schoolwork.

I mumbled incoherently at him until he managed to get me to set up my laptop for him, and eventually I just got up because the sound of “FIVE PLUS SEVEN IS TWELVE! GREAT JOB!” blaring in my ear was making for terrible sleep quality.

Today’s comic touches on an argument I sometimes have in my head when it comes to rules I deem as hideous or nonsensical, at which point I either break a rule and cite consistency or force myself to comply while throwing up a little in my mouth.

The good thing about working in fiction is that sometimes you can argue that something is so hideous spelling- or grammar-wise that you can also cite impediment of author voice, and we just have to make sure we’re not being unreasonable—at which point a Slack conversation with fellow editors yelling about how awkward some sentence or word is can become quite handy. lol

Have a lovely rest of your week!