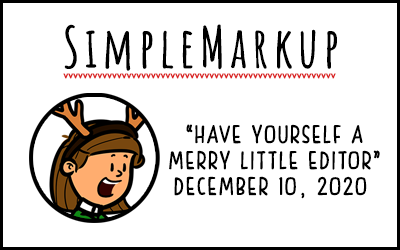 This week, like last week, has been crazy. I’ve been working like a maniac, being very productive, trying to stay on top of things so that my schedule is mostly clear for the holidays. In between, I’ve had to adapt to my new CRM, train my fabulous new VA, and try to wrap gifts so that I’m not staying up until 3 a.m. wrapping on Christmas Eve. I even bought a big Santa sack last year so that I could pre-wrap Santa gifts and store them away safely.

Except I don’t remember where I put the Santa sack. Figures.

I had a different strip idea written down for this week, but then when I was doing it, it just sounded pretty grumpy, so I had to scrap that and start from scratch. It worked out, because I’m much happier with this one.

Hope you’re having a productive December and getting ready for what will surely be a unique holiday season.