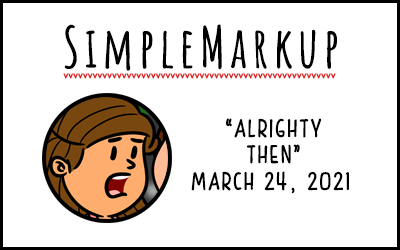 Lately, I’ve been really good about getting my comics out early on Wednesday morning. It’s not so great for my getting up early and being coherent, but at least it’s a weight off my shoulders when I’m ready to start the day. And I do get a lot of tasks done, since running an editing empire isn’t just editing—it’s doing admin too.

This week’s comic is one I’m really excited about because I’m so happy with how the artwork came out, and the joke came to me really quickly. I’d been worried about whether this meme was too old to be funny in 2021, but then I saw a post in my feed last week saying that memes never die, and that the poster still thought Strong Bad and Homsar and Radiskull and Devil Doll were still funny decades later. And I was like HECK YEAH, THEY’RE STILL FUNNY TODAY.

So that ended that little hesitation.

This, of course, touches on two particular sore points for editors. Or rather, for me. Hahaha! I’m one of those editors who makes it a mission to stomp out creative dialogue tags or action beats disguised as tags.

And yes, you guessed it, I still do the find/replace for “alright” to “all right.” These are two of my hills to die on.

Have an awesome rest of your week!