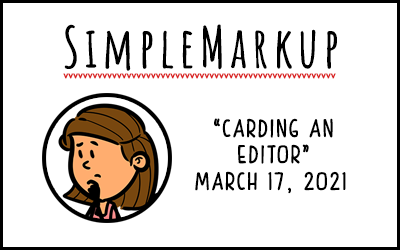 Happy St. Patrick’s Day! I can’t believe it’s already the middle of March. I’ve barely started planning for an Easter party, and it’s already coming up in just three weeks or so.

This week’s comic isn’t what I’d originally planned to do, but then some new artwork came in—first new batch in over a year!—and I couldn’t resist using it.

This one addresses something that sometimes happens to a fiction editor—we get “carded.” In other words, we’ll bring up some kind of serious writing issue that we strongly feel needs to be addressed, and the response will be some form of, “Well, Famous Author does it all the time.”

The “famous author” part is usually the most important point in that statement. A famous author can arguably do whatever they like. They’ve already got their fans, their publishing deals, their careers.

But that doesn’t stop some authors from pulling out the Stephen King card. Or the Nora Roberts card. Or the George RR Martin card. Sure, you can write a 250,000-word middle-grade fantasy novel… if you’re J.K. Rowling.

Sometimes clients listen, sometimes they don’t. An editor just has to recognize which battles are worth fighting. Have a great rest of your week!