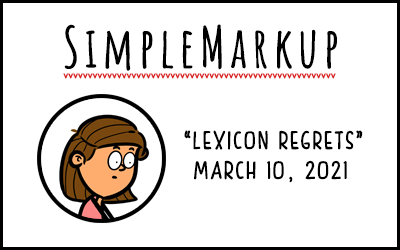 Last week was a bit of a surprise, as it turned out that my comic about how people think editors work vs. how editors actually work was really, really popular. Yesterday, it got shared on Writing About Writing, which was a cool thrill! It’s been fun to read comments and shares for the past week. Hopefully I’ve picked up some new readers along the way.

This has happened to me on a few occasions, and I’ve actually put the Urban Dictionary in the comic before—as a character. All the way back in SimpleMarkup #12, I introduced the four dictionaries. I should probably use them more often, as I don’t think I’ve used them since.

As it says above, this is comic #179, and it’s honestly hard to believe that I’ve done this for this long. Back when I was still coming up with the idea, I think I was debating doing it monthly, but then more and more comic ideas started coming to me, and I wanted to do it a lot sooner than four weeks later.

With #200 coming up this year, I have to think of what I’m going to do to celebrate. <thinking face>

Have an awesome Wednesday, and enjoy the rest of your week.