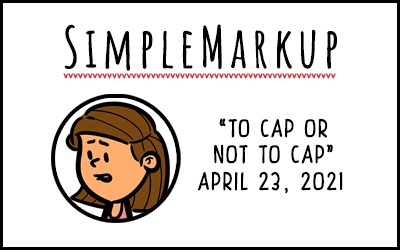 Happy Friday! I know I usually post on Wednesdays, and I was being so good about posting early for a few weeks, but deadlines have really been weighing me down, and so these last couple of weeks, I’ve had to prioritize that over the comic.

This week’s comic is inspired by a conversation we had in the new Editors Lair on Facebook group, about capitalization of races and species. I’m sure my fellow fiction edibuddies will recognize this struggle right away.

This is SUCH a struggle when actively editing. A decision you can be 100% sure on can later become a 51% uncertainty after you’ve seen a fantasy race named over and over and over. It starts to feel like it’s SPECIAL and needs to be capped, and yet you can also sometimes think the caps are too noticeable and therefore lowercase is the way to go. Arrrrgh!

In the end, it’s sometimes best to simply ask the author. If you remember to do that, that is.