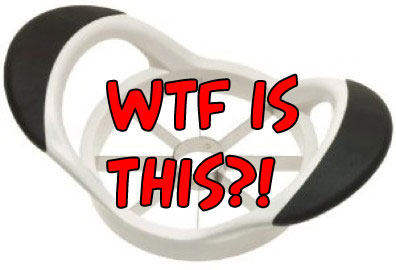 Upon first glance, this strange alien-like… thing looks like something House puts on your head to keep you still while he drills a hole in your head in order to eliminate Lupus from your list of possible ailments. Or maybe it’s some weird kind of cookie cutter? A weapon maybe?

No, my friends. This is an apple slicer.

I’m pretty sure I’ve seen one before and knew what it was. It was likely during one of my aimless clicking sprees on Amazon while trying to find something to buy so I could get free shipping.

Anyway, apparently I didn’t retain the knowledge because I didn’t really know what it was until this past Halloween, when I made caramel apples. The blog post I followed to make them suggested a apple slicer for cutting and serving the apples. I didn’t feel like buying one, so I resisted the whispers from Amazon.

That is, until I went to Safeway. The Safeway near our house is pretty gigantic and I hadn’t shopped there more than a couple of times before. I was kid-free, so I had time to just la-dee-dah and get to know the aisles a bit better, which is quite a handy thing when you DO have kids and need to just lightning bolt through the store before they start whining or breaking things.

So as I was walking around, I passed the kitchen tools section and saw one by Good Cook. It was $10, the same as online, so in a fit of stupidity I bought it. It occurred to me later that I would probably only use it once a year during Halloween and even sillier is the fact that I’d just had a conversation with my cousin about this very tool in which she stated that it takes up way too much space and that she was borrowing one for her own apple cutting at the office party.

Right now, it’s sitting in an upper shelf where I store my glasses because all of my kitchen drawers are a bit too small to hold this thing while still letting me put other things in with it. One day when I came home from work I saw a mangled apple from my husband’s attempt to cut up an apple for the kids to snack on. I showed him the apple slicer and what did he say?

“What the frick is that?”

Buy one on Amazon: