Ever since I dragged my dearly beloved to Black Swan a couple of weeks ago, he’s made this warped and pained face whenever I talk about going to the movies again, so to smooth things over I decided to pick something that might be a little more his type of movie as a peace offering. I do, after all, need a movie partner.

He didn’t really want to see Unknown, so I went for the one that was pitched during the last UFC: The Eagle.

) as Marcus Flavius Aquila, a newly ranked centurion taking up his first command at a small outpost in Roman-occupied Britain and Jamie Bell (the kid from 10-years-old movie Billy Elliot

) as his slave Esca, The Eagle centers around Aquila’s quest to bring honor back to his family name. After his father infamously leads The Ninth Legion and the famed Eagle battle standard into northern Britain, none of the 5,000 soldiers are ever seen again.

The story takes place 20 years after his father’s dishonor as Marcus seeks to gain glory the likes of which no other centurion can boast of so that no one will remember who his father was or what he had done.

After a remarkable show of bravery that saves his men and earns their respect, Marcus is injured and though he is granted many military honors, he is in the end honorably discharged from the Roman Army. Left to deal with this at his uncle’s villa in Britain, Marcus attends a small gladiator event, annoyingly “narrated” by Uncle Donald Sutherland as if we moviegoers are complete morons.

“A gladiator versus a slave? That’s never a fair fight!”

Thanks, Uncle. You should take a job as a gladiator commentator.

Still recovering from his injuries, Marcus plays a part in saving the life of Esca, who his uncle later buys for him.

After suffering insults at the hand of the son of a local politician, Marcus decides to set out on a quest for the lost Eagle to restore his family’s honor. Esca pledges his loyalty to Marcus for saving his life and they set out for the lands past Hadrian’s Wall, which is considered by Rome to be “The End of the World”.

From here the movie begins to degenerate into a cookie cutter adventure film, in which Esca magically seems to speak every tribal dialect in the Caledonian highlands and Marcus glowers through the misty meadows and rocky mountains. In what should have been a time of intricate man bonding, we instead get one small campfire talk in which they set up Esca to betray Marcus, making it so obvious that he’s not going to betray him at all.

Eventually, they discover a man who was a deserter of the Ninth and he takes them to the killing ground where the legion was ambushed and annihilated. Nevermind how utterly preposterous it is that they just so happen to run into the one man they’re looking for in all of Caledonia. I tell you, the luck of these two guys! He informs them that the Eagle is rumored to be with a tribe called the “Seal People”. Once they wander into their territory, the tables turn and Marcus becomes the slave and Esca the master. Astonishingly, Esca speaks Seal People dialect too. 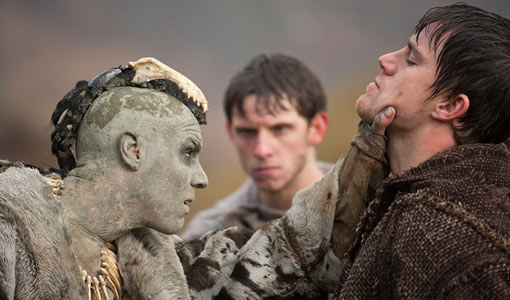 The trailer basically gives all of this away, by the way. Trailers like that seriously disgust me. Do you want me to see your movie? It doesn’t really seem like I need to after seeing that.

Channing Tatum delivered a pretty decent performance and made for a pretty hot looking Roman, but the relationship between Marcus and Esca never really developed past what you could tell you were just expected to understand about them. So while Esca does eventually help Marcus recover the Eagle, you never truly reach the point where Esca’s loyalty to a Roman is completely believable. Either that or Esca is the most grateful Briton slave ever.

The backdrop for their adventure was beautiful and the rescue scene in the beginning was definitely a thrill, but in the end, The Eagle is no more than a guilty pleasure movie with sub-standard character interaction and a predictable and corny ending. So despite The Eagle’s few merits, if you’re looking for a truly compelling Roman bromance you’re much better off watching Lucius Vorenus and Titus Pullo hack and bumble their way through the Roman Empire in HBO’s Rome