Before I go over last week’s episode, let me just get this off my chest.

Whew! What a load off that is, seriously. Now to get on with recapping one of the most romantic-sad episodes of tv I’ve seen since The X-Files aired the episode ‘The Field Where I Died” in 1996 in which Mulder meets his reincarnated star-crossed lover during a cult standoff.

To this day, that remains my favorite episode of X-Files.

It’s been quite a treat to watch Fringe go from two distinct story lines, one centering around the Olivia and Peter relationship and the other centering around Walternate’s sinister plans to destroy our universe, to having intricately begun a merging of the two so that both require the other in order to be successfully interesting and entertaining.

The show begins with a couple heading to a party on the upper floor of an apartment building that we soon learn is emptying out due to strange incidents that people have been blaming on the presence of ghosts. There are several guests of the party out on the balcony when the guy is called back in due to his girlfriend having an allergic reaction. As soon as he steps back into the apartment, the people he was just speaking to suddenly fall. Down on the street, a doorman helps a woman into a cab and people and furniture begin to hit the ground. I’m not sure why there were no screams. If I suddenly fell from a balcony I’d shriek all the way down. 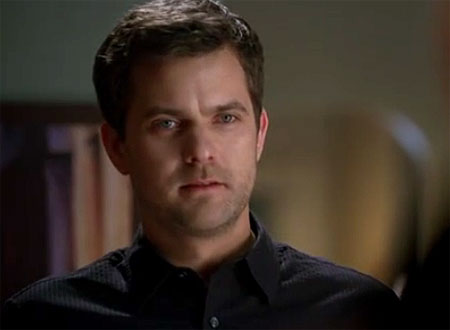 Peter earns big points by gushing his emotions out. With me. It didn’t seem to phase Olivia.
The focus shifts to Peter and Walter, where Walter is setting up the most awkward breakfast ever by setting Peter and Olivia up for a candlelight breakfast of the family specialty: blueberry pancakes. He ducks out and the two of them are left to talk, until Olivia states she’s going back to the office.

Thankfully, Peter stops her and begins telling her all the things any girl in love would die to hear. That he’s spent a lot of time fantasizing about waking up in bed next to her. That he wanted to just spend time relaxing while reading a paper with her. Enough to send any regular woman sobbing into his arms with kissing in mind, really, but this is Fringe and Fringe has 10 extra layers of Complicated Frosting to bite through.

The Fringe teams heads down to the apartment building called the Rosencrantz and after examining the balcony in question, Peter determines that the people did not jump. Instead, he poses the idea that they fell through the balcony. As Peter and Olivia talk and Olivia sneaks wanting looks at Peter’s back, Walter flips a coin 10 times and gets heads every time. This causes him to come to the conclusion that a rift is forming in our world at that location, as the same coin toss result that many times means the laws of physics aren’t applying.

Back at the lab, Walter begins snapping at everyone and ends up sending Peter and Olivia back to the Rosencrantz building to set up a seismograph to monitor any strange activity. He then asks Astrid to get him the file on the commuter bus incident, which is fascinating because it brings back the case we first saw in the Pilot episode.

As Peter and Olivia look for a way to duck out of the cold by heading to a bar in search of french fries, they pass an old woman heading back into the building. She lives in 6B, so right away you know something about this whole business is all her fault. She closes the drapes and takes out a photo album. 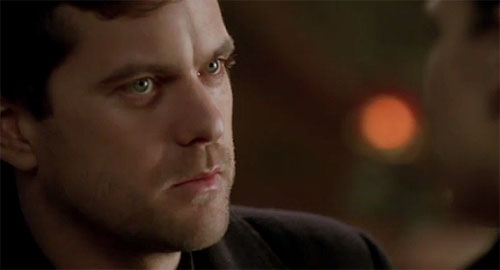 “Oh crap, I knew I shouldn’t have ordered the garlic fries…”Meanwhile, back in the bar, Olivia shows that she doesn’t really have a broken heart of stone when she blushingly recalls what he said to her earlier about them being beautiful together. She Peter that she wants to know what that feels like, then kisses him, only to stop and give him a weird, searching look.

Olivia being Olivia, she runs away to get some air outside. When Peter confronts her outside, she tells him right away that when they kissed, he began to glimmer. As they talk about her fear that she’s the one preventing them from being together, not Fauxlivia, she looks up at the Rosecrantz across the street and sees a glimmer coming from one of the apartment windows. As they run in to check, Walter calls about the sudden spike in seismic activity. They burst into 6B and Olivia sees the glowing vision of an old man, with the old woman sitting in a chair watching. She tells them it’s the ghost of her dead husband.

The old woman, named Mrs. Merchant, tells Olivia that her husband died about two months ago, a few days after he lost a coin toss to flip the switch on the fusebox, which lead to him being electrocuted. They’d been together for over forty years. Walter surmises that she’s actually seeing the Other-Mr. Merchant, not the ghost of her husband, which convinces him that he’s right about what’s going on.

Anxious to find a solution in case the worst happens and a vortex opens, Walter brings up the use of amber to plug the vortex up, which doesn’t sit well with Olivia, since she’s seen first hand the after effects of amber usage in the Otherverse. At Massive Dynamic, they’re working to replicate the compound used in the Pilot in case a vortex does open.

Walter begins to have doubts about what they’re doing, as he admits to Nina that he’s always thought of Walternate as evil, but now he’s doing the same thing. Meanwhile, Peter and Olivia come up with the theory that the soft spot is being caused by emotions, with the Other-Mrs. dead instead of Other-Mr and they’re grieving for each other in the same spot, which allows them to see each other.

Activity begins again at the Rosencrantz, so everyone assembles down there with the newly made amber device ready to detonate. Peter and Olivia run in to try to convince Mrs. Merchant that the man she’s seeing is not her husband, hoping to avoid the use of amber. Eventually, things get so bad that even Peter can see the man from the other side and the couple can now talk to each other. Downstairs, Walter turns the remote over to Broyles, as they expect a vortex to open up.

Peter steps in and delivers more lines that deserve romantic hi-fives, talking to Mrs. Merchant about how she’s experienced what he only dreams of: a lifetime spent with the person you love. While this could easily have come off as Peter straight up talking to Olivia, and to viewers it’s pretty obvious that this episode was scripted for Peter and Olivia to kiss and make up, but it’s still heartbreakingly sincere and cute. Eventually, Mrs. Merchant is able to break the connection when Other-Mr. Merchant tells her that “the girls” miss her so much. Never having had children, Mrs. Merchant is then able to see that they’re telling her the truth.

AND THEN, THE MOST AWESOME THING WE’VE BEEN WAITING FOR SINCE LIKE LAST YEAR HAPPENS.

Oh yeah, Olivia finally wakes up and embraces her relationship with Peter. She heads over to the house (it just so happens that Walter is with Nina, so the coast is clear) and after a drink, leads him upstairs. The lights go out, leaving us only with our imaginations.

This was very contrasting to Peter’s first time with Fauxlivia, as we got a shot of her bare back and black bra. It was an interesting way for them to handle this new step for them. Now if only he could knock up both of them, then I’d be really happy.

The episode ends with Olivia and Lincoln checking out Apartment 6B for what they had tracked as a Class 4 event, where Mr. Merchant denies seeing anything unusual. He then goes inside to look at old photos of him and his wife. Holy old people heartbreak, Fringe. Stop doing this to me!

All in all, a pretty solid episode with an ending we all pretty much saw coming, but it was great to watch anyway. Plus, I saw some of Olivia’s bangs when it got windy in 6B, so now I can rest a little easy about her dang hair. As I mentioned earlier, the two storylines intertwining have been very entertaining to watch and it does a lot to show the strength in the writing and the back story in general.

Shop the newest TV & Film DVDs from FOX or shop Fringe on Amazon: