Mr. Pikko rarely asks to see a movie, so when he requested we actually go see Sucker Punch in IMAX, it really says something about the movie’s marketing. Not that I needed persuasion, as the movie looked like it had a fascinating premise, scads of eye candy, and actually starred an actress I’m quite fond of: Emily Browning.

Still, that was more than enough to get me hooked onto her. She’s cute, has adorably chubby cheeks, and the girl can act for sure. Now that’s she’s a bit older, she’s definitely hotter as well.

We saw this on opening weekend and I’d had some pretty high expectations after all the marketing and stuff on tv and in theater lobbies. I was, however, extremely disappointed that the trailer described a completely different movie than what was actually presented.

Now, one would assume from this trailer that this is some sexy fantasy thriller in which the girls being forced to do against their will can fight their way out of reality through virtual reality. An interesting premise.

The movie starts out grim and wordless, the music a very slow and melancholic rendition of Sweet Dreams, sung by Emily Browning. In it, we see a girl and her sister in peril as their mother dies and her fortune is left solely to them, much to the ire of their evil stepfather. Locked in her room while her stepfather searches for the sister to abuse, the girl climbs out the window to return to defend her, but in the fight accidentally kills her sister instead.

She’s taken to an asylum, where it’s made clear that the orderly does business on the side to ensure that the patient will not remember anything and would therefore not be able to whisper a word of what went on leading up to the tragic accident. The girl is scheduled for a lobotomy in a matter of days.

The girl is given the name Baby Doll and after a tour, she’s taken to a studio, where a doctor is having the girls dance. Baby Doll doesn’t want to, but eventually does and as she sways and closes her eyes, she suddenly finds herself at a Japanese temple in falling snow. She meets with the man who tells her the things she needs to escape, which have been blatantly featured as Baby Doll was taken into the asylum in reality. She does battle like a badass and when we return to reality, everyone is breathless over her dancing.

Only no dancing was shown. Immediately I tell myself that I had better be treated to a show of her dancing or I’ll be pissed.

From here, the premise of the story began to expose itself as something completely different. Reality at this point is completely left behind. We flash between the dolled up reality of the asylum and the fancy, exotic worlds with hordes of orcs and machines to defeat, both of which are all fabricated in Baby Doll’s head. Baby Doll enlists the help of four other women: Sweet Pea (Abby Cornish), Rocket (Jena Malone), Blondie (Vanessa Hudgens), and Amber (Jamie Chung) to help her get the five things they need to escape. Each “mission” they complete in a fiery blaze of glory is a fantasy rendition of their little mission to acquire the five things. 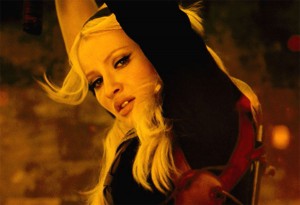 Almost as if the movie didn’t want to disappoint my little thought earlier, we never do get to see Baby Doll dance, though the entire plot line centers around her JAWDROPPINGLY AMAZING performances. It drives me to madness in the theater.

], which unfortunately doesn’t always seem to fit the scenes they’re in with the perfection that they should. At times it just seems loud and obnoxious, though you can still tell that the song is a good listen. It just doesn’t always help the movie along.

Now for spoilers, because I can’t review this without discussing the ending, since that is why the movie ultimately didn’t work for me.

So in the end, the mystery item is sacrifice. Baby Doll sacrifices herself so that Sweet Pea may escape and we find out that the story isn’t actually about Baby Doll, it’s about Sweet Pea, who has actually been narrating all along.

My response to that is: ARE YOU KIDDING ME?!?!?! This whole god damn time I’ve been led to believe that I will get closure in Baby Doll. That her story is the one that matters. That all this hullabaloo is for her. I didn’t even really care whether she escapes or not, I just didn’t like the sudden shift in protagonist.

You don’t build a complex story around one tragic character and then at the end tell people, “Oh wait, sorry, can you care about Sweet Pea instead? You know, the girl you don’t know that much about, but I’m hoping you’ll care about her anyway!” There just wasn’t enough history on Sweet Pea aside from her relationship with Rocket, which takes up all of five minutes on screen.

Baby Doll is lobotomized and we’re to “get” that she’s actually at peace now because she doesn’t have to remember the pain of her life. Only all I can think about is how lame it was that the extent of Baby Doll dancing we saw was her brief sway and a close-up of her coquettish eyes drawing you in. That the ending words by Sweet Pea don’t really make a lick of sense.

Sure, it was a wild ride with lots of eye candy and the soundtrack will be a truly bitchin’ cd to own, but the movie itself just fails to deliver a complete, cohesive story. All the pieces are there, but it’s as if one final piece teetered over the edge during production and that plunged the movie into the Realm of Meh. Had they spent more time focusing on their individual stories, maybe I would have cared more.

What the hell does Sucker Punch even mean for this story, anyway? Sadly, I don’t think I care.

Get free Fandango movie tickets when you try a special offer.