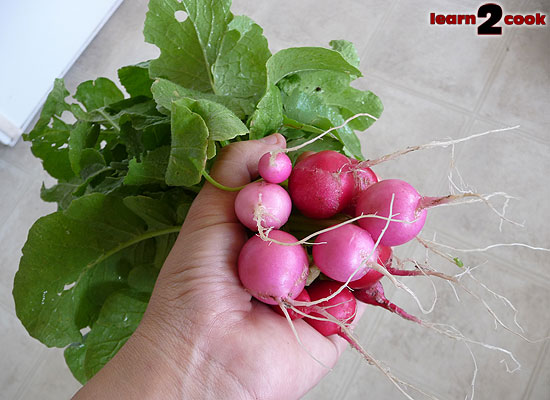 It’s been getting harder and harder to do garden updates as there’s just SO MUCH stuff to take pictures of lately. I start so many seeds that I can’t even prepare the ground fast enough and I now use one of our old rabbit cages as a “nursery” for my sprouts that go from pellets to pots until they’re strong enough to be in the garden.

This post is extremely picture heavy, so be warned! 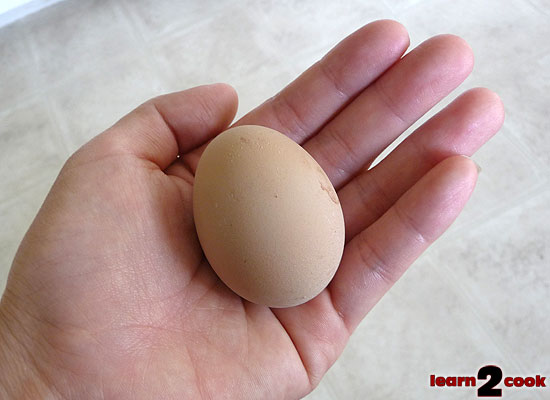 First up, our first egg! Mr. Pikko was outside one morning when I heard him yell at me to come outside. I went to the back door and he was holding an egg! Weeks earlier than we expected! Soon after, the other hen began laying and they’ve given us over two dozen eggs so far. They’re still pretty small eggs, but have gradually grown in size as they’ve gotten older. 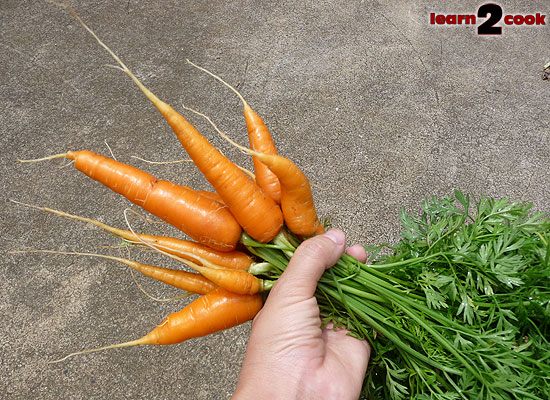 I needed carrots for a pot roast, so I had the kids and one of their neighborhood friends pull me some. They’re pretty small like the first batch, but we still love em anyway! 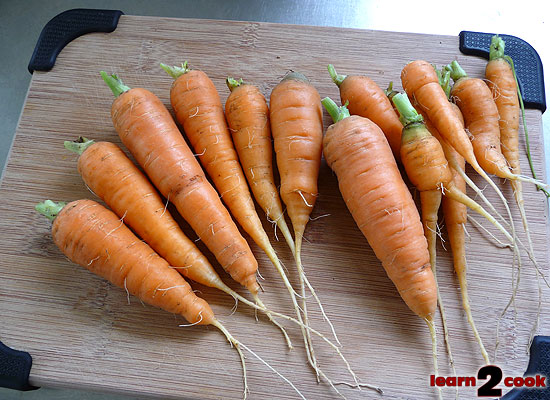 Here they are just before peeling. The tops went to the bunnies. They LOVE the stuff! 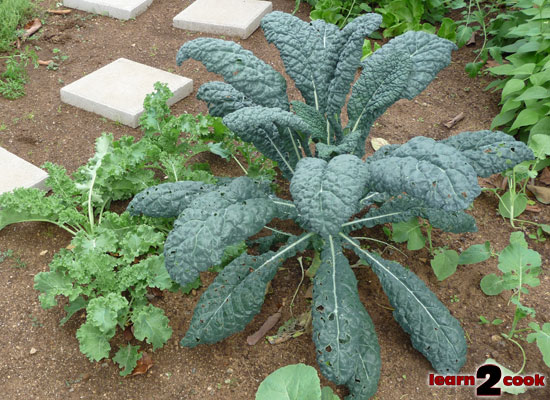 Here we have two types of kale. The Blue Vates from Hometown Seeds is on the left, while a Lacinato kale plant we bought at Home Depot is on the right. That thing is a freaking beast. The leaves are like something out of Jurassic Park. 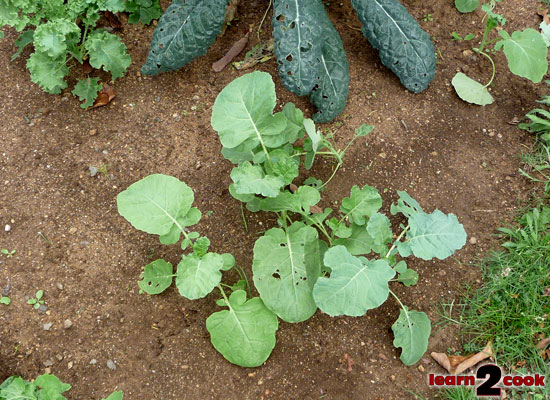 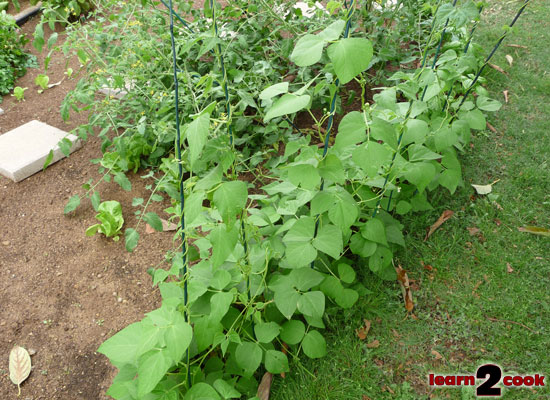 His beans are doing well too, now that they’ve been staked. His grape tomatoes are going insane behind them. We’re going to have hundreds of tomatoes to eat soon. 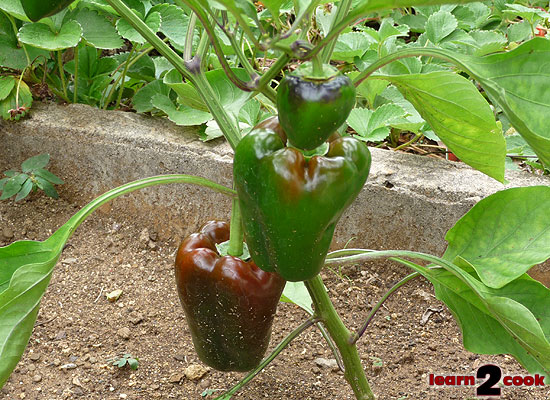 The bell peppers are ripening. They’re not very big, but hopefully as the plant gets bigger, the peppers will too. 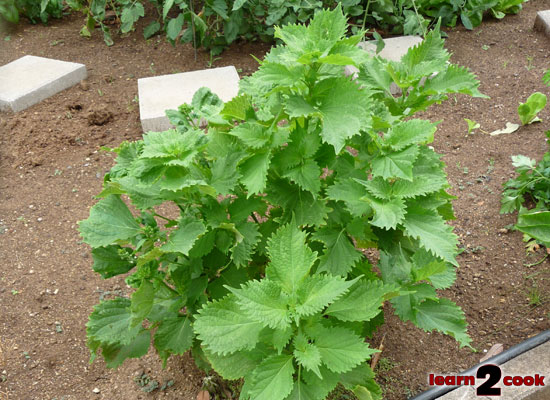 My shiso plant has exploded. I can now make shiso pesto without worrying about killing my plant! 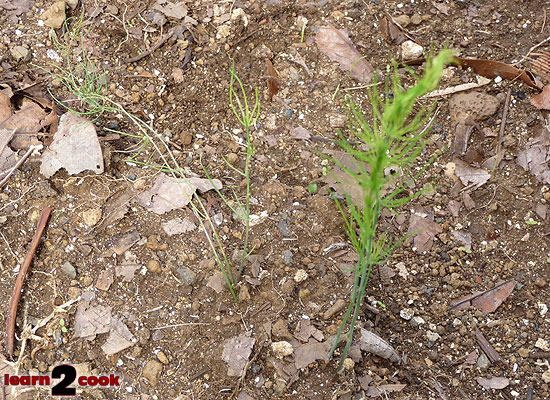 My asparagus bed is still going, though not many  new shoots have come up lately. I think I may not be watering it enough. I have to prep the rest of the bed already so I can plant the rest of the shoots in the house. 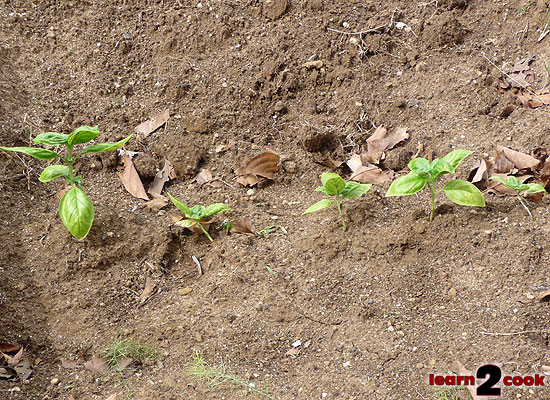 The basil I transplanted from the back is struggling, but didn’t die. I think it’ll start taking off next week as long as Max doesn’t eat it. 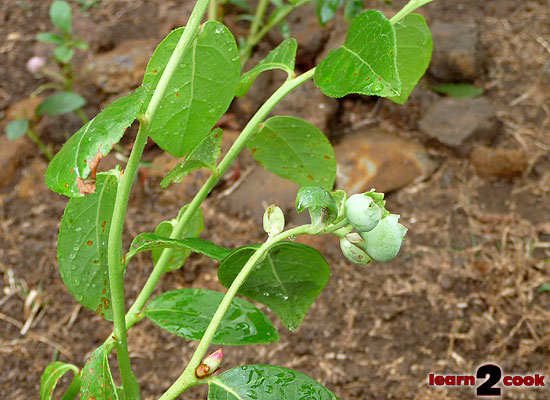 My blueberry bush has some blueberries on it! I’ll have to net it later to protect against birds. The ones that Max chewed up actually have new leaves, so at least they’re not dead! Just… “pruned”. 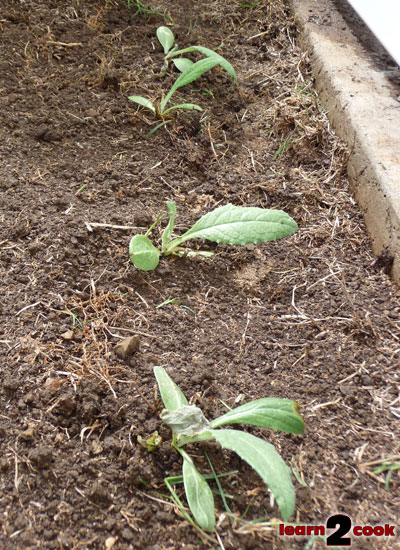 I transplanted four artichoke plants as they were looking terrible in the pots in the back. They seem much better this week, though I definitely planted them too close together… 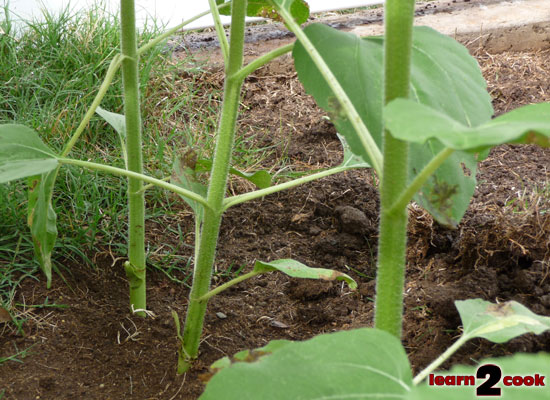 These are my sunflower stalks last week. They’re actually TWICE this size now if you can believe. I cannot believe how fast they grow!! 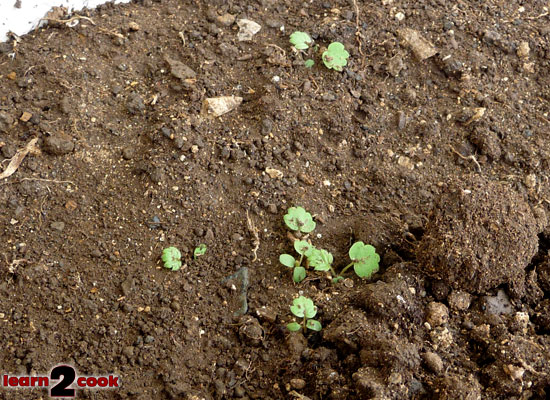 The last of my strawberry plants that Max didn’t get. New ones are sprouting up in the area he dug up. 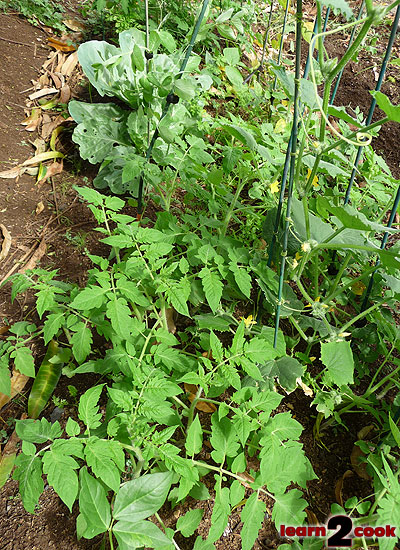 Last up is my mess garden, the one that I just threw tomato and carrot seeds into when the packets got wet. It’s getting pretty insane. 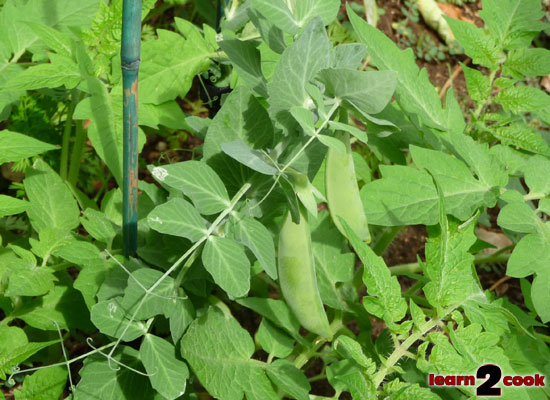 Sugar snap peas. I put some into a bento last week and they were so good! The plants aren’t doing so good though, because the tomato plants are crowding them. 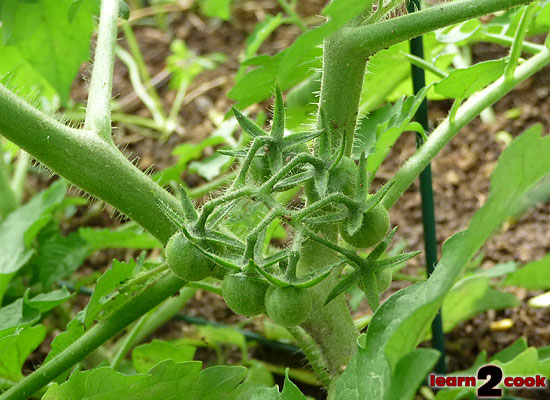 I had planted beefsteak and roma. I think these are beefsteak judging by the shape. 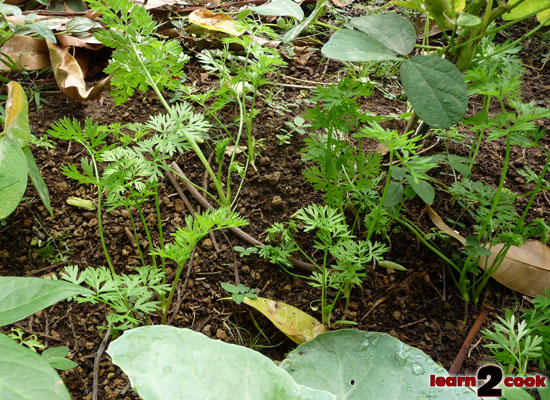 These are white carrots! 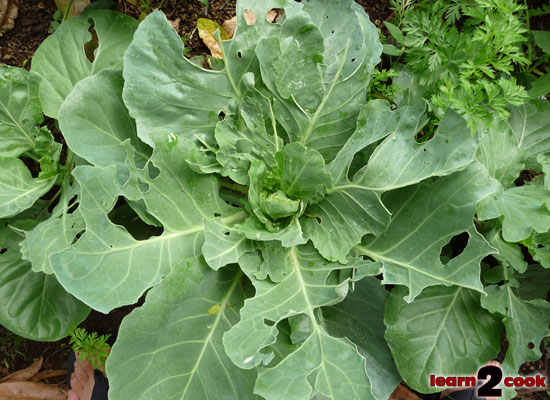 This cabbage has been growing for like five months. I think I have to give up on it already. 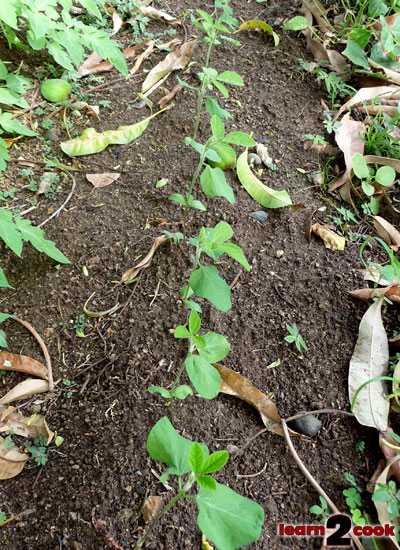 These are two varieties of edamame from Baker Creek. 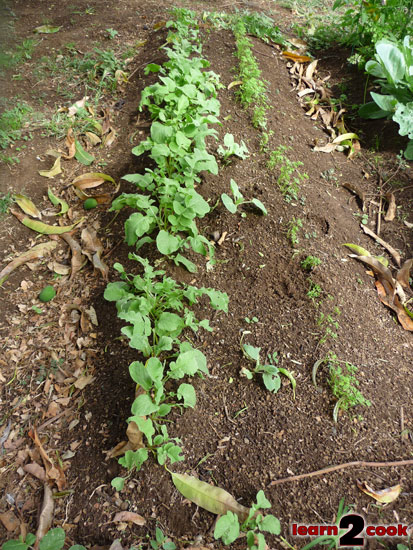 My radish and carrot bed, with chard and cabbage in the middle. 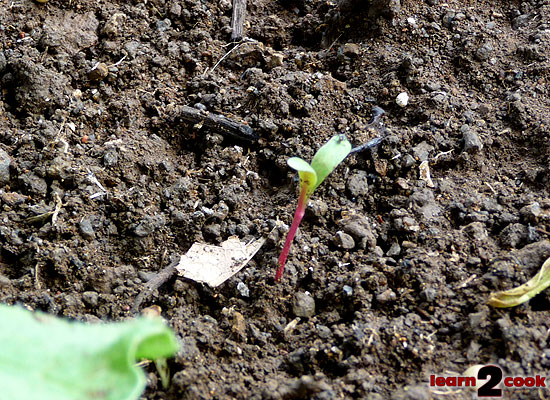 I was having a hard time getting chard to grow after transplanting, so I’m trying direct sow now. 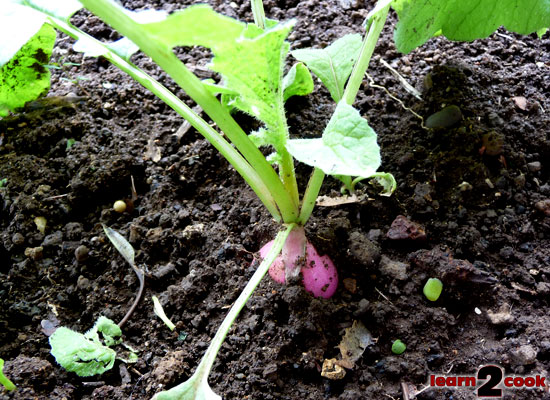 These are old Ark pink radish seeds. I LOVE the color of these! I’m trying to get one plant to seed so that I can gather fresh ones.

These are red and pink ones that I picked. The reds have a terrible bulbing rate, with only about 25% forming bulbs. The pink, though slow to germinate, had about 80% form bulbs. And nice, round ones too! Lots of my red ones formed ugly roots. And they’re horrendously spicy!! I guess the seeds just suck. The reds are commercial ones from Ferry Morse.

That’s all for this update! Hopefully I’ll be able to do this more often, though the bigger our garden gets, the harder it is to do so.