Have you ever heard of the ‘hardy kiwi’? They’re sometimes called ‘kiwi berries’. It’s a plant native to China, Korea, and Siberia and is essentially a green grape that looks like a kiwi inside.

Is that not like one of the coolest fruits you’ve ever heard of? I LOVE kiwis, but I can’t stand those times when I don’t cut enough flesh off and I’m left with needles poking my tongue. That’s seriously no fun at all. 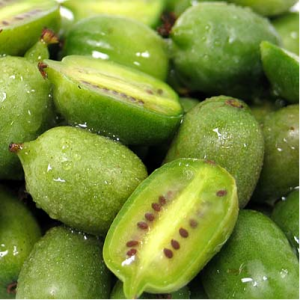 Earlier this year I made the really stupid mistake of putting a lot of time (as in, waited a while) into getting some hardy kiwi seeds I bought to sprout. I put them in Jiffy pellets

and then put them in a Ziploc bag and shoved them in the fridge for a couple of weeks, since I’d heard that cold sometimes helps germination. I actually got a few to sprout and they had decent sized leaves, reaching almost an inch in length.

But then disaster (or laziness) struck and I forgot to water them time and time again and eventually they died a miserable death on my kitchen counter. With a huge container of a wide variety of seeds that will probably expire in the next six months, I figure it’s time for me to start using them all up, so I started a new batch of hardy kiwis yesterday, putting 2-3 seeds to a pellet and putting them in the fridge again.

Hawaii is zone 11, but they like full sun, so I wanted to give it a try since it’s a bushy vine plant that gets really leafy and Mr. Pikko has been wanting to make our stone wall higher by using plants to extend the height of the wall. You know, so that we don’t have to give up our next child to a stone mason.

I’ve never eaten one, but they look and sound amazing so I’m really hoping that this time around I get things going, especially since they’re no longer sold by Baker Creek, which is where I got my packet from. Amazon

sells seeds for a dollar, but they’re from Hirts and I’ve read a lot of bad things about their seeds. The good news is that you can actually buy plants

The Baker Creek packet says germination can take several weeks (including fridge time) so that’s actually quite a long time to wait to determine if your seeds are viable. But since all my Baker Creek seeds have germinated so far, I know they’re trustworthy, even if I’m not when it comes to watering.

I’ve started a Garden Log page here if you want to check it out from time to time, though there’s nothing there now but this entry.