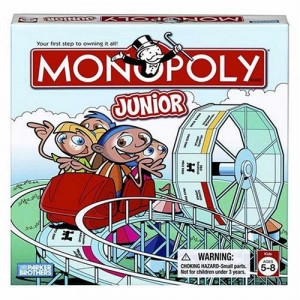 A couple months back my kids really got into board games, insisting, no matter what I said about the age range, that they wanted to play the Game of Life

, which sat unopened in our closet from a long ago Black Friday sale until they got old enough to play. We gave it a try and surprisingly enough, they loved it. Since the only other games we own are Settlers of Catan

, naturally they wanted to play Monopoly.

Them asking brought back memories of my old Lord of the Rings movie obsession years back and despite the cute and pleading faces they made, I refused to let them play with it.

Turns out, that was a really wise choice because the game now retails for a whopping $105.00!

I’ll have to look up what all the other Lord of the Rings stuff I bought is worth now!

Anyway, the kids got Monopoly Junior

for Christmas and we’ve played it a few times since then. The recommended age range is 5-8 and the lower end is a great age for this game. Simplified into a cute amusement park theme, the four player tokens are a log ride seat, a merry-go-round horse, a roller coaster car, and a bumper car. The money is reduced to denominations of $5, $4, $3, $2, and $1. You’re given only one die instead of two.

There are quite a few cute changes that make it easy for kids from Kindergarten to 3rd grade to relate to. You no longer go to “Jail”, instead you go to “Lunch”, which costs $3. Free Parking, which has no real meaning to kids at this age, becomes “Free Time”, which kids can of course relate to very much. Houses are replaced with ticket booths.

Railroads serve no purpose but to let you roll again and instead of two stacks of special cards, you just have one stack of “Chance” cards that let you do various things like travel around the board and get free ticket booths on various colored attractions. The properties keep to the regular game’s tier of worth, with the dark purple el cheapo properties Penny Arcade and Sweet Treat Snack Shop replacing “Baltic” and “Mediterranean” Avenues and the dark blue Echo Canyon Roller Coaster being the coveted “Boardwalk” property.

The one downside to the game is that it doesn’t come with anything to hold the money or Chance cards in place. If this game is about teaching kids how to play Monopoly, it should also be a method of teaching them how to properly put away games. With no holder for the items in the box, it becomes easy for kids to fall into a system of just throwing everything into the box willy nilly and that’s how game pieces get lost and game currency gets crumpled. I used Ziploc bags for the tokens and will use a rubber band and paper clip for the money and cards.

One of the most valuable things my son has come away with is the ability to accurately count money, which really should help him when his big sister is trying to gyp him out of money by giving her version of “correct” change. It’s going to take a couple more plays before he fully understands how the game works and hopefully once that happens, I won’t have to scold my daughter when I find them playing on their own and 95% of the ticket booths on the board belong to her.

Which means that now I should really start looking for a game that teaches fair play and sportsmanship. Sigh.