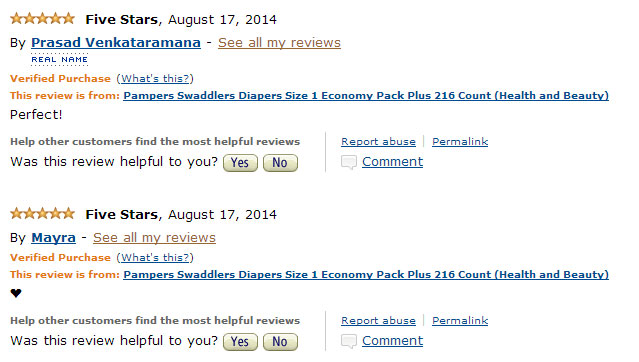 Both of my older kids had diaper rash. It’s tough to avoid when you breastfeed and have babies that constantly poop their little mustard seeds. This time, though, no amount of Desitin, butt paste, baby powder, blow drying, constant changing, or washing has helped. I’ve even tried melaleuca oil mixed with coconut oil, something several people online proclaim to be a miracle worker. Literally nothing has helped.

This led me to start researching cloth diapering. I called the doctor and they told me to stop using wipes and to keep doing everything else I’ve been doing, but with the sores now bleeding, I felt like I needed a long-term solution. Since I’m still working from home, I figured I could give cloth a try.

As I sat and waited around for my fancy shipment of cute diaper covers, pre-folds, and wet bags to come in, I decided to go and write  a review of the Pampers Swaddlers that we’ve been using for the last 200 or so diapers (a box of 128 N size, plus several packs of 1 size) because there are a couple of traits of the diapers that I just don’t like, including the chemical smell of the diaper, the mesh lining inside, and the umbilical cord dip in the N size that doesn’t seem to matter.

It’s Not Just Me

With those negatives in mind, I was a little surprised to see that the diapers had 4 1/2 stars. Was I the only one who wasn’t happy with them? I started reading reviews and began noticing a trend in the negative reviews:

The mesh liner in these stick to my baby’s bum with and without barrier cream in place. I found myself peeling the diaper away like it was a sticker! This caused a rash for my little girl 🙁 [source]

We bought this brand because it’s what the hospital used. I was alarmed when the diaper stuck to my newborn’s bottom, requiring me to gingerly peel away a soiled mess without pulling away any skin. I read on some Internet forums that this has happened to others as well, and the common theme seems to be Pampers. [source]

I bought these for my baby, found over 4 times that the diapers were stuck in his butt and I have to use water to soft the diaper and took them off. He has red butt now, the costo one I uses before never had this problem! [source]

I also had the problem of the diaper sticking badly to his butt and diaper rash on his bottom. Since I have changed to an other brand his diaper rash disappeared and I no longer have to change his clothes with every diaper change. [source]

My baby boy developed a terrible rash after 3 days of using these diapers!!! We used to use size 1 pampers in individual packs ( 20 per pack) and everything was great! Even our hospital used pampers that’s why we fell in love with them. However size 1 in individual packs didn’t have mesh, and this big box from amazon has mesh. I’m sure that’s the reason for rash as every time I changed a diaper I would notice that diaper would be glued to my baby’s butt. I mean every single time there was #2, which happened a lot! [source]

I purchased these for my newborn son and the inner lining stuck to his skin whenever wet. I changed to Huggies and all rashes cleared up. [source]

It had never really occurred to me that the diaper brand could be the cause of the rash. I’d just assumed that it was disposable diapers in general.

As a company, Pampers appears to be well aware of the problem. Every reasonable negative review (excepting the usual stupid Amazon reviews about shipping, etc) has a response from Pampers, including my own. The response to mine came just two hours after I posted it.

So why were these diapers still SO highly rated?

Apparently because of a slew of reviews like these: 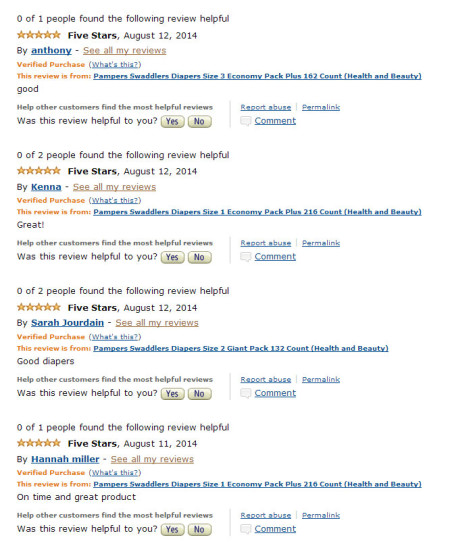 Yes, I’m fully aware these are all Verified Purchases, therefore they must be real right?!

For those that don’t realize, there are people out there that make a (crappy) living being review sock puppets. Ever wonder why some no name person on the Internet or some new business no one’s heard of can have so many people just simply loving them? You can go online and buy thousands of Facebook likes for your business or hundreds of Twitter followers. I’ve also suspected for a long time that you can go out and buy Amazon reviews.

In fact, I’ve even been approached to do a five star review on Fiverr. If it wasn’t for my policy that I actually try the product, people probably would have bought my review gig. Someone has even offered me the product in exchange for 5-stars, which I said was NOT what I was offering.

The 890 5-star reviews on Amazon are peppered throughout with stupid reviews just like those above. And when you click on “See all my reviews”? Most of them have one other review, many times from the same day as the Pampers one. 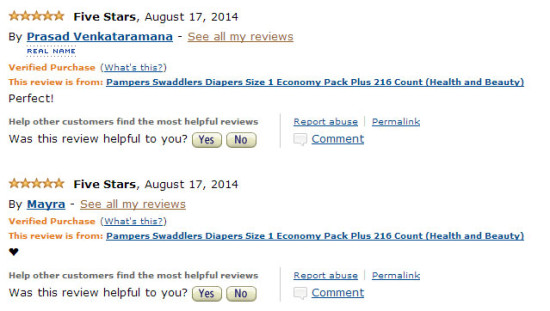 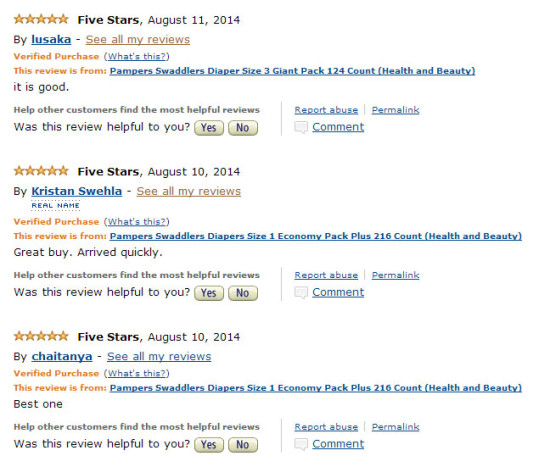 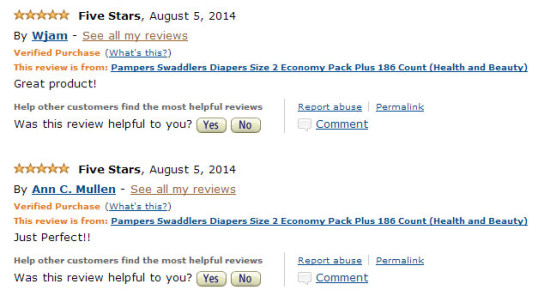 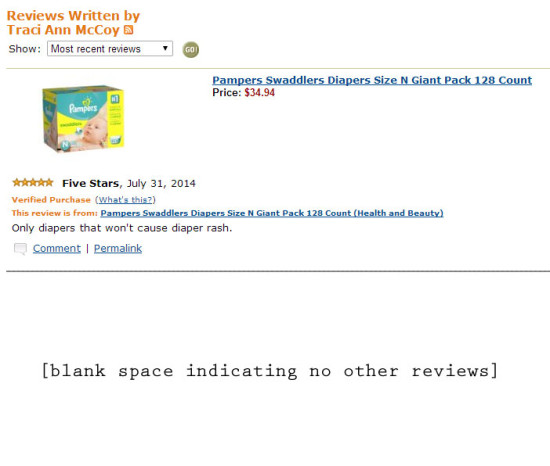 Oh, it’s the only diaper that won’t cause diaper rash? How convenient of you to mention that, Traci Ann!

So what am I saying? Exactly what you think I’m saying.

I smell a ratings push to keep Pampers Swaddlers highly rated and selling well on Amazon. Sure, I could be wrong, but I’ve seen enough to convince me that something just isn’t right. I’m writing this with my little guy on my lap, wearing what will hopefully be his last Pampers diaper until Daddy comes home with the pack of Huggies I instructed him to buy until my cloth diaper adventure begins.

Honestly, it wouldn’t surprise me at all if the sores improve within a few days. And if it is Pampers behind this ratings push, (honestly, who else would it be?) shame on them.