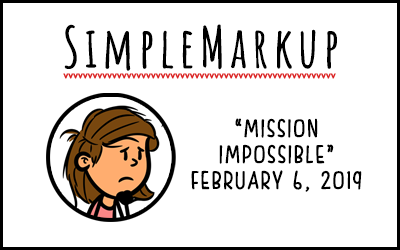 Oh boy. The first month of 2019 is already gone. Hopefully any of you reading from the areas that had to endure the polar vortex are feeling warmer and happier. The closest I got to a polar vortex was the release of a book, which I did the interior design for, called… Polar Vortex.

Can you believe that it was published like eight days before the real polar vortex hit? Talk about crazy!

All right, so for the last few weeks, I have to admit, I’ve been winging it. I usually have a bank of ideas written in my phone that I can go scroll through for inspiration, but I haven’t been putting new ideas in for a while, and my vault is running a little low.

Last night, however, I was emailing a client who asked me to write my bio for his website, and I started cracking a joke, asking whether I could have a couple of extra days to scream at what I’d written about myself and call it ugly names and edit it 500 times and the rewrite it from scratch.

And voila. This week’s comic. 🙂