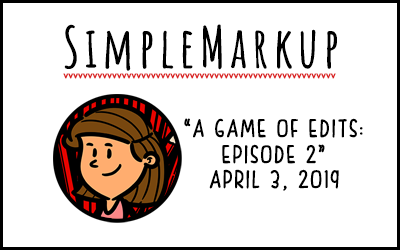 I have to start a rewatch of the last season just as a refresher, so this week I hope to be hyper-focused so that I actually have free time at night. I work all the way up until bedtime, which gets pretty exhausting after a while, so I have to have a “relaxation goal” to allow myself the time.

I had hoped to do a full show rewatch, but then I came to my senses. I’m already trying to a Marvel rewatch.

Edie’s new work chair doesn’t look quite as uncomfortable as the real Iron Throne, thankfully. It still doesn’t look like something fun to sit in, though. 🙂 The Iron Throne is so iconic, and last Christmas I finally got around to getting the ornament. It’s quite heavy, but it’s great next to my HO-HO-HODOR ornament.

Also, I know I threw it in as a joke, but doesn’t a Westeros IKEA actually sound like a pretty fun place to shop?

My latest Book Lovers Box is out, and it’s themed to epic fantasy, so those of you growing old waiting for Winds of Winter, it’s a great way to find a new great epic to get lost in.

Have a great week!