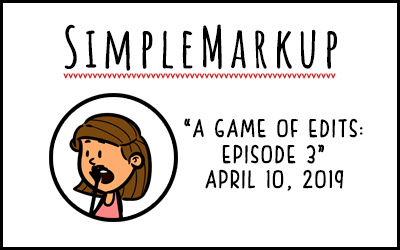 So I officially started my Game of Thrones Season 7 rewatch on Monday, watching the premiere episode and then going to bed. Thinking I needed to get at least two in last night, after finishing up almost all my work like a good little editor, I watched one, then two.

Then three, then four… It was crazy how different the season is when you’re watching it Netflix style instead of week to agonizing week. It’s actually quite exhilarating, and the season takes on a different pace when you’re just able to binge. A couple of people I know are trying to do a full rewatch, but I don’t think they’re going to make it, which was why I chose to just do the last season.

Besides, it’s still too soon for a Red Wedding rewatch. I could never finish rereading A Storm of Swords because of that scene, and believe me, I tried. Twice. Some things are just too heart-heavy to repeat.

Also because the showrunners went extra for the show’s Red Wedding. *shudder*

This week’s comic is dedicated to rapid-release authors, who don’t seem to sleep or eat—they just write. And yes, I know that many write walkers actually just spend a long time saving up manuscripts, but being undead is also very plausible (in my humble opinion).

As much as I’m poking fun, though, much respect to all the write walkers out there. 🙂