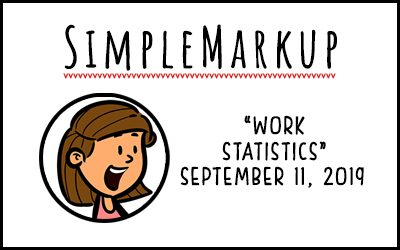 So last week I mentioned that I had a little health scare, and I told myself that I would be good about exercising, and surprisingly, I have. In 2019, I told myself I had to make progress in teaching myself how to get into certain grooves, but it was only in the last four months or so that I really made good progress on that.

In the end, it’s come down to training myself to get into a habitual mindset rather than a reactive mindset. Instead of doing immediate fixes to problems that come up, I have to come up with something I can do consistently so that I can form a new habit.

It’s helped my productivity a lot, and so far it seems to be helping my activity too, as I’ve done a 15-minute workout every weekday since I started last Tuesday. And I’ve walked the dogs every day, which means most days I’m getting exercise twice a day. It’ll probably take me a couple of months to get the habit really formed, so hopefully I stick it out. Wish me luck!

Seriously, though, I need an EditBit! I keep track of how many words I edit daily, but I do this manually. What a pain! Someone invent this. I’ll buy it. (as long as it’s not on Kickstarter)

And if you’re curious, I look up the words “bloodstained” and “crisscross” approximately eight times every day.