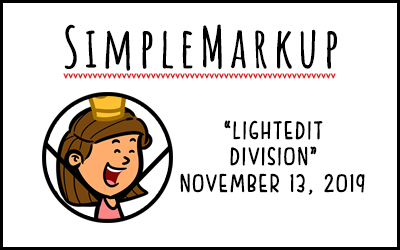 I honestly have no idea where the heck the first half of November went. It’s like I blinked and it’s getting to Christmas shopping crunch time. I’ve been finding that I’m rather susceptible to advertising right around now, and I already knocked off a bunch of people by buying them all the same thing. It’s not cheating if I thought it was so amazing I bought one for myself, right? lol

In this week’s comic, Edie gets into an editing argument with an edibuddy, and she’s so happy they were able to work things out. However…

I realize this may make people feel called out, and I think this because we’re in the job of correcting things, which means we mostly get off on being correct about things (though I definitely do enjoy learning new things).

Anyway, yes, Edie should probably be bigger about it and just move on, but sometimes editing fights get fierce, and a little private call for celebration (and an imaginary crown) is understandable.

Don’t forget to join me and 300+ other editors on the Editors Lair!