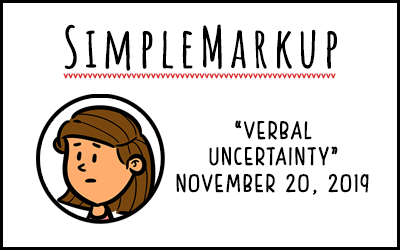 It’s been almost three months since I started exercising twice every weekday, and my weight loss has stagnated, but my waistline is still slimming down, so I’m still sticking with it. I miss days here and there, but I’ve moved on to level 2 on the workout series I’m doing from Maggie Binkley, and it’s kicking my ass, which is great. I can actually do real modified push-ups now, too!

This week’s comic comes from a sudden realization that randomly popped into my head this morning. I immediately went to my team Slack and asked what people do, and two people confirmed something utterly mind-boggling to me.

Just recently, I finished recording, editing, and uploading a dialogue punctuation course I’m going to be offering up for free (join my author newsletter, Notes From Pikko, to get early access in a couple of days!) soon, and I finally said out loud: EE-EM DASH.

And then this morning, boom. I realized that’s probably not how most people say it. Or maybe not how anyone says it. But FOR REAL. I’ve been “saying” ee-em dash in my head for years now. Talk about ee-em-barrassing. I don’t even know if I can stop saying it like that.

What about you? Is there something you said wrong for a long time before learning about how everyone else says it? For me, it was rendezvous and hors d’oeuvres. I didn’t learn until I was a teenager that it’s not “ren-dez-vess” or “whores duh-vores.” Yeah, ouch.